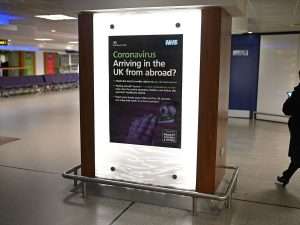 (AFP)— Travellers arriving in Britain from abroad will face 14 days in quarantine, a senior minister confirmed on Friday, saying the government would give details later.

The self-isolation rules will apply to international arrivals to the UK and include Britons returning to the country.

“People who are coming to the UK will have to do quarantine,” Northern Ireland Secretary Brandon Lewis told Sky news.

“We’re saying to people you’ve got to make your own arrangements, if you’re coming to the UK then you need to make those arrangements.

“Obviously for the UK citizens coming back they’ll be able to quarantine at home, for visitors they will need to make arrangements for where they can do that quarantine for 14 days.”

The plans are expected to come into force next month and further details are due to be outlined by Home Secretary Priti Patel at a daily briefing.

Lewis said the policy would be reviewed every three weeks.

There are expected to be exemptions for road hauliers and medical officials, and the common travel area with Ireland and the Channel Islands will be unaffected.

But it is thought that arrivals from France will have to quarantine despite claims earlier this month that there would be an exemption.

Lewis also played down an idea floated by his Cabinet colleague Grant Shapps for “air bridges” — allowing visitors from low-risk coronavirus countries into the UK without having to quarantine.

“There’s no plans for that at the moment,” he said.

The quarantine move is controversial, especially with the aviation sector.

Ryanair boss Michael O’Leary earlier this week branded a proposed quarantine plan “idiotic” and accused the British government of “making it up as they go along”.

In response to the proposals, Virgin Atlantic said in a statement that new quarantine rules would prevent services from resuming, claiming there “simply won’t be sufficient demand to resume passenger services before August at the earliest”.

Trade body Airlines UK has said it “would effectively kill” international travel to the UK.

However, others have questioned why the UK did not introduce quarantine earlier, like countries such as South Korea, Spain and the US.

“The UK has been rather too much on the back foot, increasingly playing catch-up, firefighting,” Geneticist and Nobel Prize winner Sir Paul Nurse told the BBC.

“We are desperate for clear leadership at all levels.”

Britain has recorded the highest number of deaths in Europe from coronavirus, with more than 36,000 people who have tested positive having died so far.