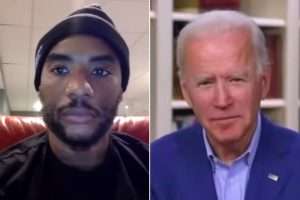 (NEW YORK POST) – Joe Biden on Friday told the popular host of a New York City-based syndicated radio show that he “ain’t black” if he was still pondering whether to support the presumptive Democratic nominee or President Trump in November.

The former veep’s remarks came during an interview on “The Breakfast Club,” where Charlamagne tha God challenged Biden over his record on racial issues and consideration of a black, female running mate.

“I’m not acknowledging anybody who is being considered, but I guarantee you: There are multiple black women being considered. Multiple,” Biden said on the program, according to Politico.

An aide to the candidate could then be heard trying to cut short the interview.

“Thank you so much. That’s really our time. I apologize,” the aide said.

“You can’t do that to black media!” Charlamagne said.

“I do that to white media and black media because my wife has to go on at 6 o’clock,” Biden snapped back, apparently referring to a planned media appearance by Jill Biden.

“Listen, you’ve got to come see us when you come to New York, Vice President Biden,” Charlamagne said. “It’s a long way until November. We’ve got more questions.”

“You’ve got more questions?” Biden responded. “Well I tell you what, if you have a problem figuring out whether you’re for me or Trump, then you ain’t black.”

Charlamagne also questioned Biden about how he could win his presidential campaign while ensconced in his basement during the coronavirus pandemic.

“I’m following the rules. My governor says he doesn’t want us out, I wear a mask, and by the way, I’m beating them across the board. All the stuff about hurting me is not hurting me, I’m ahead in all states in all national polls and the more he talks the better I am,” Biden replied, referring to Trump.

In a statement to Mediaite, Charlamagne provided a comment about Biden’s remarks, saying, “We have been loyal to Democrats for a long time, black people have invested a lot into that party and the return on investment has not been great … As Biden said in our brief interview when I asked him if Dems owe the black community ABSOLUTELY was his answer. So let’s see what you got!!! Votes are Quid Pro Quo. You can’t possibly want me to Fear Trump MORE than I want something for my people.”