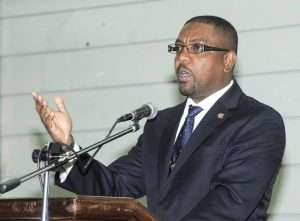 (newsday.co.tt) – Former Cricket West Indies (CWI) president Dave Cameron has issued a legal letter to CWI demanding a copy of the Parnell Kerr Foster (PKF) audit which allegedly highlighted financial mismanagement when he was president of the board from March 2013 to March 2019.

According to a report on the CNC3 newcast on Tuesday night, Cameron is giving CWI 48 hours to make the audit available to him or he will threaten to take the matter to the High Courts.

Cameron wants the opportunity to comment within 21 days on all the issues raised in the audit, comments made by West Indies fast bowling great Michael Holding and current president Ricky Skerritt.

Holding raised a number of issues surrounding financial mismanagement within CWI on Youtube, recently. Holding was reading from an audit conducted by external and independent auditor Parnell Kerr Foster (PKF) on his programme Mikey – Holding Nothing Back.

Holding said the Board of Control for Cricket in India donated US$500,000 to CWI for past players. Holding said he keeps in contact with several past players and they never spoke about receiving money from CWI.