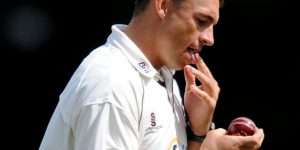 (AFP) — Cricketers are set to be banned from using saliva to shine the ball due to the coronavirus pandemic, following recommendations by the International Cricket Council (ICC).

The ICC’s influential cricket committee met via conference call yesterday and made the recommendations after a briefing from the governing body’s medical advisory committee.

It was unanimously agreed that the “elevated risk of transmission” caused by polishing the ball using spit meant the traditional method must be shelved for now, though sweat will still be permitted.

Additionally, it was decided to vote for a suspension to the rule guaranteeing neutral umpires in Test cricket in a bid to minimise travel amid quarantine issues.

No home nation umpire has stood in a Test since 2002.

In 1994, the ICC mandated the use of one neutral umpire per Test, which was extended to two eight years later.

The committee also suggested one additional DRS review should be awarded to each team per innings.

The measures must now go forward for consideration by the ICC chief executives’ committee before being approved.

Former India Captain Anil Kumble, who chairs the cricket committee, said: “We are living through extraordinary times and the recommendations the committee have made today are interim measures to enable us to safely resume cricket in a way that preserves the essence of our game whilst protecting everyone involved.”