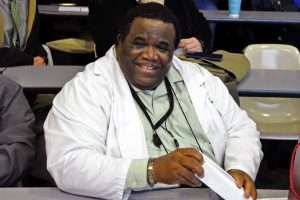 (THE HILL) – A doctor who delayed his retirement to fight the coronavirus pandemic at a low-income hospital died of COVID-19, The New York Times reported Monday.

Pulmonologist James Mahoney reportedly worked his day shifts in the intensive care unit of the University Hospital of Brooklyn, which, like many hospitals in New York, initially lacked the medical equipment needed to treat the onslaught of coronavirus patients during the pandemic.

Mahoney, who was 62, had the option of retiring after serving for 40 years as a physician, but instead treated his patients until he contracted the coronavirus and died on April 27, according to the Times.

His older brother, Melvin Mahoney, who was already retired, stopped seeing patients at the beginning of the pandemic, like many older physicians, the newspaper noted, adding that James Mahoney, who had treated patients during the AIDS epidemic, the 9/11 attacks and Hurricane Sandy, refused to step away.

James Mahoney also worked night shifts at nearby Kings County Hospital Center and conducted telemedicine sessions with his regular patients during the pandemic, according to the Times.

During the second week of April, he reportedly told his boss in a text that he had a fever but continued to consult patients while he was isolated at home. He was admitted to the University Hospital’s emergency room on April 20, when he could barely walk, the Times reported.

On April 26, his colleagues reportedly took him to Tisch Hospital, which had a blood oxygenation machine that University Hospital did not have. Five colleagues followed the ambulance to the hospital and were with him when he died.

Medical students, especially African Americans, had seen James Mahoney as an inspiration. Dr. Latif Salam, an internal medicine specialist at University Hospital, called him “our Jay-Z” in an interview with the Times.

New York City has not released specific statistics on how many health professionals were infected with or killed by coronavirus, but medical workers said hundreds were out sick last month.

“One of the sad stories of this pandemic is that we’re losing people that we couldn’t afford to lose,” Robert Foronjy, James Mahoney’s boss, told the Times.