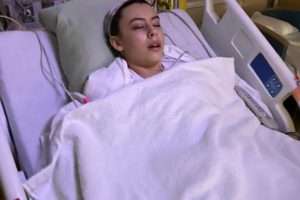 (NEW YORK POST) – A 14-year-old Queens boy battling a rare coronavirus-related syndrome found in children says he woke up with “fire” in his veins, according to a report.

Jack McMorrow first fell sick in mid-April with mild symptoms, including a slight fever and rashes on his hands, CNN reported.

But then days later, the teen woke up with a fever “so high” that he was unable to move his limbs, according to the report.

“The only way I could describe it is that it felt like almost electricity or fire coursing through my veins,” McMorrow told CNN’s Don Lemon.

He was admitted with heart failure to the hospital, where doctors determined that he was one of at least 145 city kids with pediatric multi-system inflammatory syndrome, or PMIS, that has been linked to the virus.

The Centers for Disease Control and Prevention has begun referring to the mystery disease as multi-system inflammatory syndrome in children, or MIS-C, and issued new criteria for diagnoses, such as cough, fever and muscle aches.

“He was showing signs of having shock,” Connors told the outlet.

McMorrow, who had no pre-existing conditions, tested positive for both coronavirus and antibodies, the doctor said.

He said the tests showed that the teen had been battling the virus long enough to have antibodies, but there was an active strain in his nose, according to the report.

“When you have an active infection and especially one that is transmitted by the respiratory tract, you can find it first in your upper respiratory tract, in the nose and in the throat,” he said. “After you’ve had an infection what you hope will happen (is that) your immune system will develop protection to it if you see it again and the most common thing to look for protection is antibodies.”

Doctors are investigating cases of the syndrome, which appears to be a post-viral condition, in at least 18 states and Washington D.C., CNN reported. It has also been detected internationally in Italy and the United Kingdom.