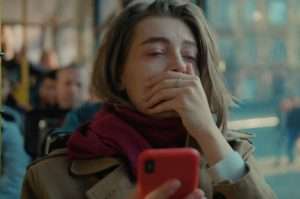 (NEW YORK POST) – This development is nothing to sneeze at.

Coronavirus could soon be detected by sneezing or coughing onto a phone, using a tiny sensor that will produce results within 60 seconds, according to reports.

University of Utah engineering professor Massood Tabib-Azar said he’s leading a team of researchers to develop a quarter-sized device, which can be plugged into the phone’s charging port and test saliva particles for the virus, Metro UK reported.

“If someone breathes, coughs, sneezes or blows on the sensor, it would be able to tell if they had COVID-19,” Tabib-Azar told the outlet.

If the virus is present, there are DNA strands in the sensor that would bind to the virus proteins, which would trigger electrical resistance that signals a positive result, Tabib-Azar said.

“The sensor would change color or visually indicate the presence of COVID-19 so it can be can be viewed with the naked eye,” Tabib-Azar said.

Tabib-Azir said the gadget could be available within three months since he already created a prototype of the sensor a year ago to help detect the mosquito-borne Zika virus.

“The plan is to program it to identify COVID-19 instead,” said Tabib-Azir, who was awarded a $200,000 National Science Foundation Rapid Response grant to develop the new device, according to news station KTVX.

Tabib-Azir noted that the gadget could be produced inexpensively and would also be a less invasive way to test for the virus.

People are currently tested through a nasal swab where mucous is collected from the back of the nose and throat.

“I think it will help a lot with opening the country and giving people peace of mind that they are in a safe environment,” he told news station KSL-TV.