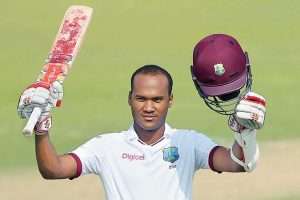 (CMC) — Cricket West Indies (CWI) has not received any recommendations for the award of new central contracts for the coming year, chief executive Johnny Grave has said.

Attempting to put to rest speculation on social media that West Indies Test Vice-Captain Kraigg Brathwaite had not been issued a retainer, Grave said CWI had not yet approved a list for the new period starting July 1.

“The board is waiting on the recommendations from the Financial Strategy Advisory Committee before deciding on when new contracts will be issued,” the Englishman told Barbados Today online here.

“All current contracts expire on the 30th of June 2020, with new contracts due to start on July 1st.”

A social media post from a senior Barbados Cricket Association official earlier this week sparked debate over Brathwaite’s future, especially in light of his poor form with the bat over the last 18 months.

The obdurate right-hander, the most senior player in the current squad with 59 Tests, has averaged 12 in his 10 Tests dating back to 2018.

He also struggled in the recent domestic first-class championship, garnering just 468 runs at an average of 33 without a single hundred and three half-centuries from 15 innings.

In fact, Brathwaite averaged 25 at the start of the eighth and final round but struck 48 and an unbeaten 84 against deposed champions Guyana Jaguars, to improve his record for the season.

The 27-year-old Brathwaite, who made his debut as a 19-year-old nine years ago, has emerged as West Indies’ leading opener but has now seen his Test average plummet to a modest 33.

Grave said under CWI policy, senior team players not awarded an international contract would not be left in the cold.

“If any international contracted player loses their contract, they are automatically offered a grade A contract for the next year, which is the highest level franchise contract,” Grave explained.

A similar situation arose four years ago when Darren Bravo rejected an international contract, after being downgraded to a C-grade retainer.

At the time, then CWI President Dave Cameron rejected seniority as a basis for the award of high-grade contracts, pointing out that it was up to players to determine their contract based on the quality of performance.

“All we are saying is that you write your own contract. At the start of the season you are told what averages you need to have, volume of runs, volume of wickets, behaviours, whatever. It’s up to you,” Cameron said at the height of the Bravo controversy