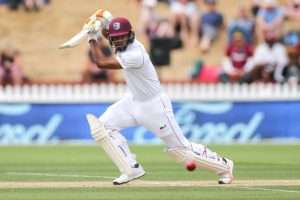 (CMC) – Although acknowledging failing a fitness test, former West Indies opening batsman Kieran Powell has lamented being left out of the squad and in the dark about why he continues to be omitted despite credible performances on the field.

But Cricket West Indies (CWI) chief selector Roger Harper has defended the decision not to include Powell, saying that factors other than performance were at play.

CWI recently identified a 30-man provisional squad for the impending tour of England, which is tentatively set for July. Powell, who was dropped from the Caribbean side in 2018, expressed disappointment that he was not recalled.

Kieran Powell says he is unsure why he is still being passed over for West Indies selection.

Speaking on the Mason and Guest radio show here recently, the left-handed batsman acknowledged that he did not pass the fitness test, but insisted that other players who either failed the test or did not show up for it, were selected.

Against this background, and the fact he was the leading run scorer in the last Regional Super 50, amassing 525 runs in the domestic limited-overs tournament, the 30-year-old Nevisian said he was puzzled why he was not given the opportunity to wear the maroon colours again.

“Even though I wasn’t really as productive as I would like to have been…I still managed to stand out above everyone else that played in the tournament. So, it’s just a bit disheartening to not have been selected,” said Powell, who has a Test batting average of 26.81 after scoring 2,011 runs, including three centuries and twice as many half centuries, in 40 matches for West Indies.

He added that what was more worrying was that he has been given no word about what is keeping him out of the squad.

“It’s clearly not performance,” he said.

Stressing that he was not accusing CWI of giving him a raw deal, Powell added: “I don’t mind fighting, I don’t mind training hard, I don’t mind having to do more than other people. That’s perfectly fine, but just provide me with clarity so that when I wake up I know that I have to execute x, y and z to get to my target and I can plan accordingly.”

Harper, responding to Powell’s concerns in a separate interview on Mason and Guest, said selectors had nothing against the cricketer.

“When we picked our squad, we picked what we thought was the best squad,” the chief selector said. “He made runs in the Super50, I know, but there were other criteria that came into contention.”

However, Powell said he was unaware of any other issue that would cause him to be passed over.

“I’m going to have to give him a call or hopefully he gives me a call. Somebody could reach out to the other party and explain what needs to be done,” he said.

“I don’t mind not being selected, this is part and parcel of it. West Indies cricket has been here long before me and I’m pretty sure it will be here long after I’m gone, but the communication is the most important thing. He says there are more factors to it…. I’m trying to ascertain what those factors are so that I can personally work on whatever else I need to work on so I can get my international career back up.”

Powell last played West Indies Test cricket in November 2018 against Bangladesh and his last ODI was against the same team the following month.

The left-hander, who made his first-class debut for the Leeward Islands in March 2008, said he was not satisfied with playing cricket at just the regional level.

“I think that every player should be playing regional cricket with the aim or the ambition to want to represent the West Indies. As soon as that goes for me, I will stop playing regional cricket. As a child I’ve never envisioned myself wanting to just play for the Leeward Islands, it’s always been about playing for the West Indies. So that lack of clarity is what’s really confusing to me,” he said.

Powell said he was just as puzzled about being relieved of the Leeward Islands captaincy in 2019, ahead of the start of the last Regional Super 50.

He said the team had seen continuous improvement with him at the helm and was “starting to become competitive again”, moving from bottom of the table to reaching the semi-final stage in the Regional Super50 tournament.

There had been speculation that Powell’s refusal of a retainer contract influenced the Leeward Islands Cricket Board’s decision to replace him with Antiguan right-hand batsman and wicket keeper Devon Thomas.

However, he added: “Then I was told that they’re not sure whether I’d be committed, after I had already had a long meeting with them stating my 100 per cent commitment to Leeward Islands cricket. It’s just one of those things that leaves you puzzled, but at the end of the day my job is to play cricket and score runs.”

Despite not getting the West Indies selectors’ nod this time around, Powell said that with the damper the COVID-19 pandemic has put on sport, he is training and working on his fitness so that whenever cricket restarts, “fitness is not an issue”.