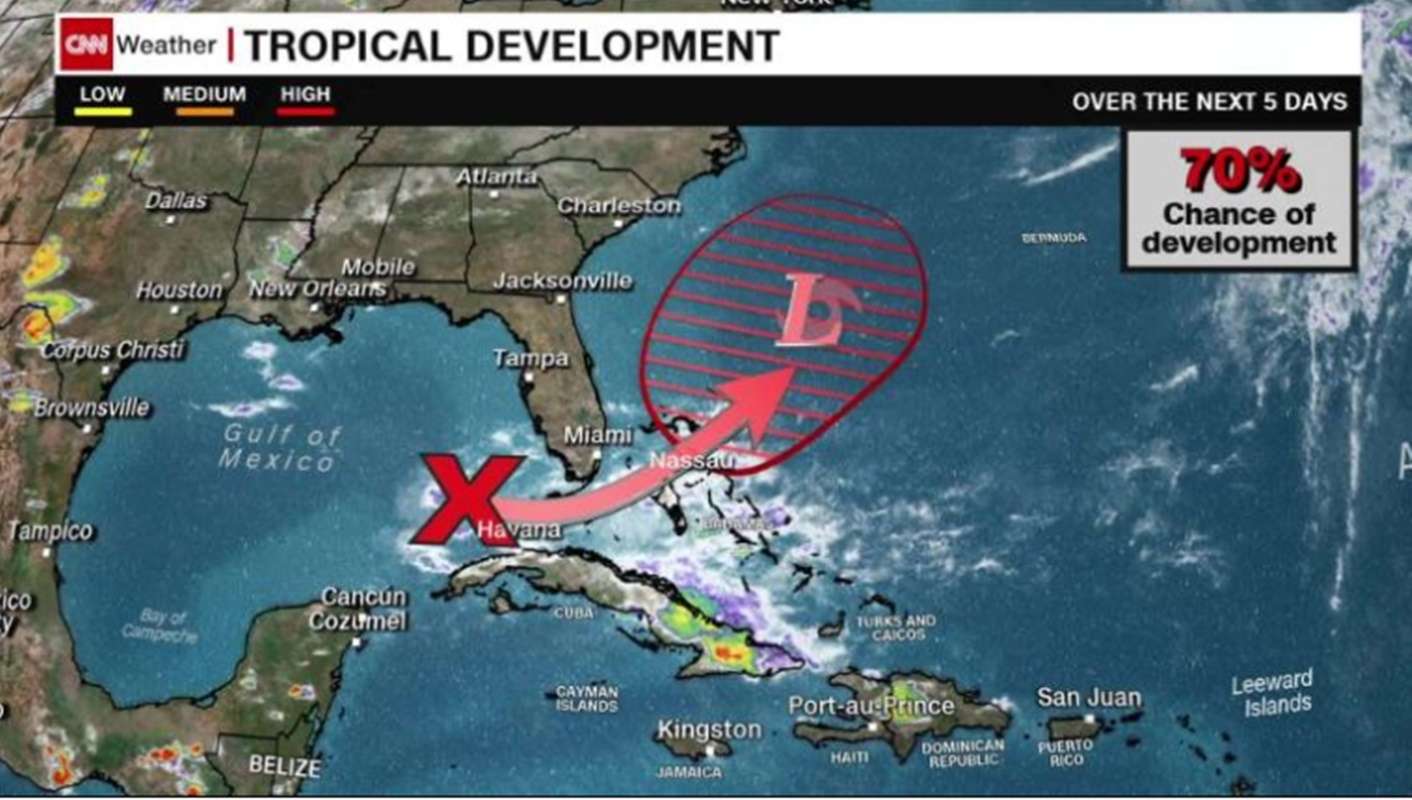 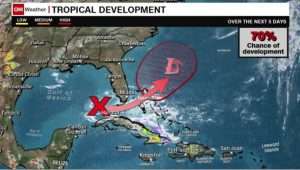 (CNN) — Forecasters are pointing to a possible named tropical system off the southeastern US coast this weekend.

“This system is likely to become a tropical or subtropical storm by late Friday or Saturday when it is located near the northwestern Bahamas,” the National Hurricane Center said.

This could be the sixth consecutive year with a storm forming before June 1 — the official start of hurricane season.
If the system were named, it would be Arthur, the first name on this year’s Atlantic hurricane list.

As the storm gets its act together it could come close to the East Coast early next week before getting pulled back out into the Atlantic Ocean.

The most significant threats to land will be probable tropical storm-force winds, heavy rainfall and dangerous surf.

“If the system were to develop, it would likely be a subtropical depression or subtropical storm,” CNN meteorologist Dave Hennen says. “A subtropical storm is a hybrid between a regular area of low pressure (cold core) and a purely tropical system (warm core).”

“This potential storm is not likely to become a full hurricane,” CNN meteorologist Chad Myers says. “Still, with ocean temperatures above normal most of the year, the middle of May will likely become the new start of tropical storm season.”

Sea surface temperatures continue to remain above average across the Atlantic — except for the cooler North Atlantic.

Warm surface temperatures are the fuel needed for hurricane development.

“Although the eastern half of North America has been cold the last few days and coastal waters are cooler than normal, the offshore area of likely development is still 2 degrees above normal,” Myers says.

It is these sea surface temperatures and the possibility of La Niña forming that have most seasonal forecasters calling for an active, possibly even extremely active, Atlantic Hurricane season.

La Niña is the cool phase of the El Nino-Southern Oscillation (ENSO) climate pattern — a naturally occurring phenomenon that involves fluctuating ocean temperatures in the Pacific.

La Niña is the opposite of El Niño, which is the warm phase of the cycle. If La Niña forms in the Pacific, it can significantly increase the number of hurricanes in the Atlantic because it creates a more favorable wind environment.

There are over a dozen early forecasts published. And even though the official forecast from the National Oceanic and Atmospheric Administration won’t come until May 21, a strong consensus in the forecasts across the industry indicates the Atlantic is in for an active season.

This could be the sixth consecutive year with a storm forming before June 1 — the official start of hurricane season.