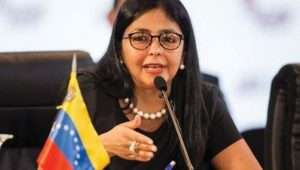 “Delcy Rodriguez is subject to travel sanctions that are binding on all Rio Treaty parties, and Trinidad and Tobago is a party to the treaty,” the Embassy said.

The Rio Treaty, otherwise known as the Inter-American Treaty of Reciprocal Assistance, is an agreement between countries in the Western Hemisphere as part of a mutual defence system.

The treaty provides for mutual assistance if an act of aggression threatens the peace of the Western Hemisphere.

Back in September, the signatories met to discuss and vote on whether to employ the regional treaty to impose sanctions on Venezuelan President Nicolas Maduro.

In that meeting, convened by the Organisation of the American States, 16 of the 19 signatories agreed to abide by the Rio Treaty and supported using the agreement to collaborate on law enforcement operations and economic sanctions against Maduro and his associates.

T&T abstained from voting at that meeting but the country is still bound by the agreement. Uruguay voted against it and Cuba was absent.

Speaking to the media after that abstention, Rowley said that the vote was an attempt to put pressure on Venezuela by use of military intervention.

The Embassy’s Public Affairs Section also yesterday said that the issue of the gas shipment from T&T to Aruba is still engaging US attention.

“The US government is aware of reports indicating a shipment of gasoline from Trinidad and Tobago may have gone to Venezuela,” the Embassy said.

“In general, entities and individuals risk exposure to US sanctions by operating in the Venezuelan oil sector or materially assisting, sponsoring, or providing financial, material, or technological support for, or goods or services to or in support of, PDVSA or other persons designated or identified under relevant sanctions authorities,” the Embassy said.

“This remains true regardless of how the transactions with Venezuela are conducted, whether using currency or in-kind exchanges, and without respect to whether such conduct is otherwise legal under another country’s laws,” the Embassy said.

It said that they are also aware that some companies engaged in the Venezuelan oil trade attempt to disguise the true nature of their business.

“The US government will actively investigate all efforts by Maduro and his supporters to circumvent US sanctions and take appropriate action against those determined to be engaging in sanctionable activity, as well as those who are found to be violating US sanctions,” it warned.

On March 27 T&T lifted border restrictions and the Ministry of National Security allowed Rodriguez and a delegation from the Venezuelan energy company PDVSA to enter the country and meet with Rowley.

Since then the Government has defended itself saying that neither Rowley, Minister of National Security Stuart Young nor Foreign Affairs Minister Dennis Moses was aware of who else was in the meeting.

Young said that the entire delegation did not meet with the prime minister, just Jiminez. But despite the small number in that meeting, they were not introduced.

Both Rowley and Young also denied knowing that the plane belonged to PDVSA or was on the US sanction list.

According to Article 8 of the Rio Treaty, in the case of a fall out the chiefs of diplomatic missions would be recalled, there would be a break of diplomatic relation, a break off of consular relations, the imposition of a partial or complete interruption of economic relations or of rail, sea, air, postal, telegraphic, telephonic, and radiotelephonic or radiotelegraphic communications; and use of armed force.

T&T is bound by the conditions set out in Article 20.

“Decisions which require the application of the measures specified in Article 8 shall be binding upon all the Signatory States which have ratified this Treaty, with the sole exception that no State shall be required to use armed force without its consent.”