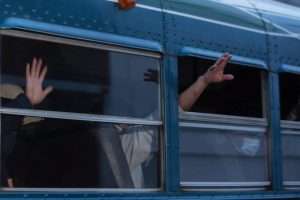 (AP) — The young migrants and asylum seekers swim across the Rio Grande and clamber into the dense brush of Texas. Many are teens who left Central America on their own; others were sent along by parents from refugee camps in Mexico. They are as young as 10.

Under U.S. law they would normally be allowed to live with relatives while their cases wend their way through immigration courts. Instead the Trump administration is quickly expelling them under an emergency declaration citing the coronavirus pandemic, with 600 minors expelled in April alone.

The expulsions are the latest administration measure aimed at preventing the entry of migrant children, following other programs such as the since-rescinded “zero tolerance” policy that resulted in thousands of family separations.

Border agencies say they have to restrict asylum claims and border crossings during the pandemic to prevent its spread. Migrants’ advocates call that a pretext to dispense with federal protections for children.

In interviews with The Associated Press, two recently expelled minors said border agents told them they would not be allowed to request asylum. They were placed in cells, fingerprinted and given a medical exam. Then, after four days, they were flown back to their home country of Guatemala. The AP is withholding the minors’ last names to protect their privacy.

Brenda, 16, left Guatemala in hopes of reaching the United States to eventually work and help her family. Her father works on a farm, but it’s not enough.

Her family borrowed $13,000 to pay a smuggler and months later she crossed illegally. Authorities later took her into custody in April at a Texas stash house, she said.

She has since returned to her family’s home and is under quarantine.

Similary, a 17-year-old named Osvaldo said agents wouldn’t let him call his father before his expulsion. He was held with other children in a cold room and issued a foil blanket as well as a new mask and pair of gloves each of the four days he was in custody.

Someone took his temperature before he was deported, but he wasn’t tested for the coronavirus until he was back in Guatemala. Osvaldo was given no paperwork on his immigration status, just the medical report from his examination.

“I thought they would help me or let me fight my case,” Osvaldo said, “but no.”

A 10-year-old boy and his mother, whom the AP is not identifying because she fears retribution for speaking publicly, spent months at a squalid camp in Matamoros, Mexico, across from Brownsville, Texas, waiting for their immigration court dates under the Trump administration program known familiarly as “Remain in Mexico.” Thousands of families waiting in Mexico have had their court dates suspended indefinitely during the pandemic.

When she lost an initial decision, she decided he would be better off temporarily with her brother in the United States. She watched him swim across the Rio Grande and reach the other side.

The woman expected he would be be treated the same as before, when such minors were picked up by the U.S. Border Patrol and taken to Department of Health and Human Services facilities for eventual placement with a sponsor, usually a relative.

But the mother heard nothing until six days later, when her family received a call from a government-operated migrant shelter in San Pedro Sula, Honduras.

“They had thrown him out to Honduras,” she said. “We didn’t know anything.”

The boy now lives with an aunt in the capital, Tegucigalpa. Another relative has agreed to take him back to the family’s rural village, if she returns to care for him. But she fears her former partner, who abused and threatened both of them.

“He doesn’t want to eat. All he does is cry,” the woman said. “I never imagined they would send him back there.”

Their case was first reported by CBS News.

Amy Cohen, a psychiatrist who works with the family and leads the advocacy group Every Last One, criticized the government’s treatment of the boy and other children.

“This boy has gone through multiple traumas, ending with the experience of being placed on a plane by himself and flown to a country where no one knew he was coming,” she said.

Under a 2008 anti-trafficking law and a federal court settlement known as the Flores agreement, children from countries other than Canada and Mexico must have access to legal counsel and cannot be immediately deported. They are also supposed to be released to family in the U.S. or otherwise held in the least restrictive setting possible. Those rules are intended to prevent children from being mistreated or falling into the hands of criminals.

U.S. Customs and Border Protection began the expulsions in late March, using the emergency as justification for disregarding the Flores rules. CBP said it processed 166 children last month as “unaccompanied” minors, meaning they would be taken to HHS youth holding facilities and allowed to stay in the U.S. at least temporarily, and the remaining 600 were processed as “single minors” and expelled.

But HHS says it received just 58 unaccompanied minors in April. Spokesmen for both agencies were not immediately able to address the discrepancy.

CBP says it exempts children from expulsion on a “case-by-case basis, such as when return to the home country is not possible or an agent suspects trafficking or sees signs of illness.” An agency spokesman declined to provide more specifics.

The U.S. recorded 16,800 unauthorized southern border crossings in April, down about 50% from March and 88% from a year earlier. CBP acting Commissioner Mark Morgan said last week that the U.S. may keep expelling migrants even as states begin to ease coronavirus restrictions.

Meanwhile, as the virus has spread through immigration detention facilities, the U.S. has deported at least 100 people with COVID-19 to Guatemala, including minors. Guatemalan Foreign Minister Hugo Monroy recently called the U.S. “practically the Wuhan of the Americas,” referring to the Chinese city where the virus was first detected.

Michelle Brané, director of migrant rights at the Women’s Refugee Commission, said the virus is an excuse for expelling children, and the Trump administration could admit them and still counter its spread through measures like temperature checks and quarantines.

“At the very heart of it,” she said, “it has always been about trying to block access to protection for children and families and asylum seekers.”