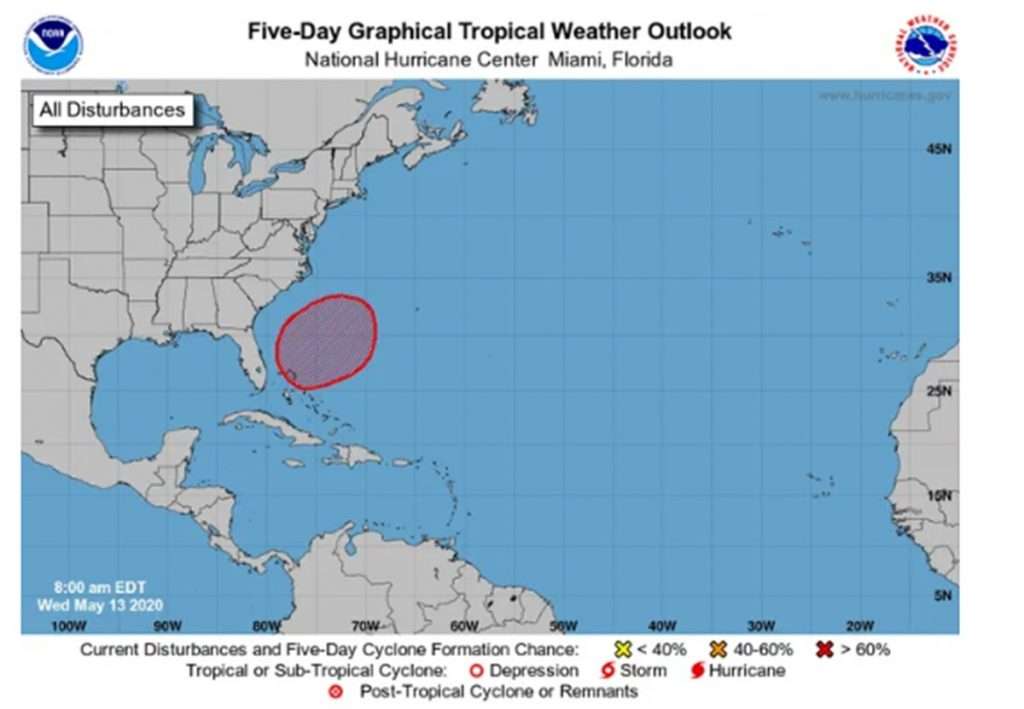 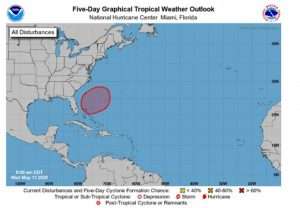 (USA TODAY) — The 2020 hurricane season should get an early start this weekend, forecasters said, as a tropical or subtropical storm is likely to form near Florida and the Bahamas.

While they system should not have any direct impact on the southeast coast of the U.S., Florida will see rough beach conditions and increasing rain chances this week before the system forms Thursday into Friday, weather.com said.

As of midday Wednesday, the National Hurricane Center said there was a 70% chance of tropical development within the next five days. “A broad area of low pressure is expected to develop late this week or early this weekend near or within a couple of hundred miles north of the Bahamas,” the hurricane center said.

A subtropical depression or storm is likely to form this weekend while it moves northeastward over the western Atlantic, the hurricane center predicted.

If the system gets a name, it would be Tropical (or Subtropical) Storm Arthur. Subtropical storms are those that have characteristics of both tropical and non-tropical weather systems. Storms get a name when their winds reach 39 mph.

The system is forecast to remain well off the southeast coast and track farther out to sea. But dangerous waves and life-threatening rip currents will be possible along Florida beaches leading up to the storm, the National Weather Service in Melbourne, Florida, warned.

AccuWeather senior meteorologist Brett Anderson said “it appears this system, should it form, will likely be lopsided with a considerable amount of dry air on its westward side, closest to the U.S., and showers and thunderstorms on its eastern side, over the Bahamas.”

Meanwhile, on the other side of the world, a typhoon is predicted to wallop the Philippines over the next few days. The storm, known officially as Vongfong, is spinning a few hundred miles east of the Philippines.

Now with sustained winds of 100 mph, the system is equivalent to a Category 2 hurricane, the Joint Typhoon Warning Center said. Threats from the storm include flooding rain, mudslides, coastal flooding and damaging winds, forecasters said.

Widespread rainfall amounts of 4 to 10 inches are expected across the central and northern Philippines through Sunday, CNN said.

The typhoon, which could reach Category 3 status, is known as Alba in the Philippines.

Typhoons, which are the same type of storms as hurricanes, are tropical cyclones that form over the Pacific Ocean north of the equator and west of the International Date Line.