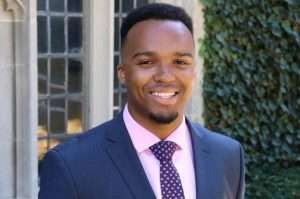 Nicholas Johnson, 22, got the formal announcement in April and said he hopes the recognition will inspire other black students.

“It is very empowering and I hope the achievement can serve as an inspiration and motivation for black students,” Johnson said on a university podcast, ABC News reported.

Johnson, who plans to attend a Ph.D. program at Massachusetts Institute of Technology, completed his thesis on developing algorithms to help health initiatives aimed at curtailing obesity in his home country, according to the school’s statement.

The work can also be applied to Canada’s public health policies regarding social distancing amid the coronavirus pandemic, according to the statement.

Before entering his senior year, Johnson worked as a software engineer for machine learning at Google’s headquarters in California. He also interned at Oxford University, studying machine clearing at the school.

Johnson told Princeton that some of his fondest memories at the Ivy League university were the international internships he completed in places such as Peru, Hong Kong and the United Kingdom.

The relationships he built with his fellow students also stood out for him.

“My favorite memories of my time at Princeton are memories of time spent with close friends and classmates engaging in stimulating discussions — often late at night — about our beliefs, the cultures and environments in which we were raised, the state of the world, and how we plan on contributing positively to it in our own unique way,” Johnson said.