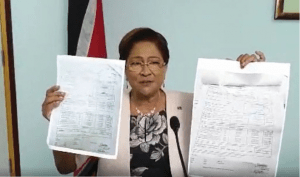 guardian.co.tt – The political battle between Prime Minister Dr Keith Rowley and Opposition Leader Kamla Persad-Bissessar seems to be heading for the courts as Persad-Bissessar has given instructions to her lawyers to initiate legal action against the Prime Minister for statements he made about her during a news conference on Friday.

The both were addressing the visit of Venezuelan Vice-President Delcy Rodriguez to T&T last month which came shortly before a shipment of fuel from this country to Aruba, was further sent to Venezuela.

US sanctions prohibit the sale of fuel to Venezuela.

After Persad-Bisessar disclosed documents showing that senior executives of the Venezuelan state oil company, PDVSA, was also on the aircraft that brought the Venezuelan Vice-President here, Rowley criticised her actions as unpatriotic and closed the news conference with the words, “You are a traitor lady.”

Persad-Bissessar, in response, referred to the Prime Minister as a “shameless Judas”.

Speaking with the media yesterday during a hamper-distribution drive at the UNC’s San Fernando Regional Office on Lazzari Street, San Fernando, Persad-Bissessar revealed her intention to take legal action.

“All the lies, in addition to his very, very abusive language and defamatory language used on that day with respect to my comments and to myself, I have placed the matter in the hands of my lawyers to take pre-action protocol with respect to defamation action against the Prime Minister for his totally baseless allegations made on Friday evening after my press conference,” she said.

She told members of the media that after providing documents to support her statement on Friday, “in response the Prime Minister had no defence but to admit what I was saying was true—that these officials from PDVSA came and visited him.”

‘So that matter will be taking place,” she added, in reference to the defamation action.

When she spoke at that said news conference, Persad-Bissessar produced a manifest from the March 27 flight that brought Venezuela’s Rodriguez to the country for a brief meeting.

She also queried whether the T&T Government had talks on the Paria Fuel Company fuel deal during that meeting although it was announced Rodriguez had come to discuss COVID-19-related matters.

In a media statement on the Office of the Prime Minister Facebook page yesterday, Dr Rowley sought to once again clear the air.

“In a shameful attempt to encourage the American Government to apply damaging sanctions against the people of Trinidad and Tobago, the Opposition Leader is engaged in publishing and spreading a series of falsehoods and conspiracy theories in furtherance of her selfish political objectives,” he said.

He then outlined what he called the undisputed facts:

2. Paria conducted no business with PDVSA.

3. Trinidad and Tobago conducted no fuel business with Venezuela.

5. The nature of the Venezuelan transport is not a matter for the Cabinet of Trinidad and Tobago.

6. Trinidad and Tobago, with the agreement of the United Nations and Caricom, recognises the Maduro Government as the sitting Government of Venezuela and as such is constrained to acknowledging and dealing legally with the authorities there.

7. Contrary to the misinformation published by the Opposition Leader the actions of Trinidad and Tobago break no international law.

She was one of 11 officials sanctioned by the European Union in June 2018, with her assets frozen and a travel ban issued against her.

The Mexican Senate froze the assets of officials of the Maduro administration, including Delcy Rodríguez, and prohibited them from entering Mexico in April 2018.

Switzerland sanctioned Rodriguez in July 2018, freezing her assets and imposing a travel ban.

The United States sanctioned Rodriguez in September 2018 for “corruption and humanitarian issues”.

None of the sanctions, however, prevented Rodriguez from visiting Trinidad and Tobago.