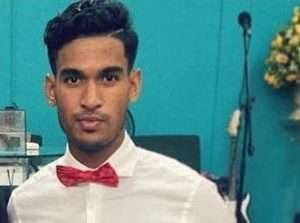 (TRINIDAD EXPRESS) – A TWENTY-FOUR-YEAR-OLD doctor from San Fernando allegedly jumped to his death from a third-floor apartment in Champs Fleurs early yesterday morning after using a mixture of alcohol, LSD and marijuana.

Police received a call about the incident around 2.15 a.m.

Officers said they were told that, around 2 a.m., the 24-year-old was at the Hilltop Drive, Champs Fleurs, apartment of another doctor, Aaron Ali, also 24, and a friend who lives in Tunapuna.

While at the apartment, Khanhai ingested alcohol, LSD ((lysergic acid diethylamide) and marijuana.

According to www.drugs.com: “LSD, first synthesised in 1938, is an extremely potent hallucinogen. It is synthetically made from lysergic acid, which is found in ergot, a fungus that grows on rye and other grains. It is so potent its doses tend to be in the microgram (mcg) range. Its effects, often called a ‘trip’, can be stimulating, pleasurable, and mind-altering or it can lead to an unpleasant, sometimes terrifying experience called a ‘bad trip’.”

Police said after Khanhai consumed the drugs he suddenly became erratic and ran towards the balcony of the apartment and jumped over.

He fell more than 30 feet onto a paved car park.

Two officers from St Joseph Police Station responded to the E999 call and met Khanhai’s friends who told them what happened.

With their help, the doctor, who was bleeding through his nose, was placed into the police vehicle and taken to Eric Williams Medical Sciences Complex, Mount Hope, where he died while undergoing treatment.