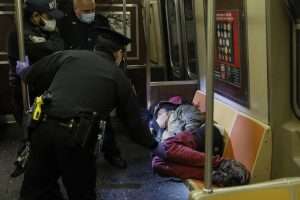 (AP) — Three hours before mealtime, a line begins to form on the sidewalk outside St. Bartholomew’s Episcopal Church, facing Park Avenue in one of New York City’s poshest neighborhoods.

By 5:30 p.m., when plastic bags of carry-away suppers are unloaded from a van and ready for pick-up on a folding table, the line will have twisted around two corners to the opposite side of the block — nearly 300 homeless people waiting patiently, roughly 6 feet apart, some neatly dressed, some heartbreakingly bedraggled.

Listening to some of them, and to the staff who operate the daily meal program, this much is clear: However difficult it’s always been to be homeless in New York, it’s tougher and scarier now amid the coronavirus pandemic.

For those living in close quarters in city-run shelters, there’s fear of exposure to COVID-19. The Department of Homeless Services has identified more than 650 cases and more than 50 COVID-19 deaths among the 17,000 single adults in its shelter system.

For the estimated 3,500 homeless New Yorkers who live on the streets, including most of those lined up outside St. Bart’s, worries about disease are coupled with other new indignities.

Scores of them, opting to sleep on the subways, were removed from the trains by police in a clearance operation last week. And with so many closures of coffee shops, rehab centers, even the restrooms at Grand Central Station, it’s harder than ever to find a bathroom they can use, or a place to take a shower.

Juan de la Cruz, who oversees the St. Bart’s meal service on behalf of New York’s Coalition for the Homeless, says many of his clients — despite their deprivations — don’t want to stay at city-run shelters.

“People are scared to be there,” he said. “They don’t want to be inside because of the COVID-19 situation.”

But on the streets, he says, many lack “the simple things we take for granted.”

Before the pandemic, de la Cruz said, the meal service menus were often enhanced by food donations from nearby corporate cafeterias. Now, with most offices closed, the servings are repetitive: cartons of milk, oranges, soup, simple sandwiches.

Ryan O’Connor has befriended many of the soup kitchen’s clients during five years with the homeless coalition. One of his saddest recent conversations was with a homeless man who’d been able to shower regularly thanks to a discounted gym membership — and now cannot because gyms are closed.

O’Connor says clients often ask where they should stay at night. He’ll provide a list of shelters but doesn’t offer recommendations.

“Suggesting someone go to a shelter — right now, it doesn’t seem right,” he said.

Among the hundreds of homeless people who’ve been sleeping in the subways is Robin Gibbs, 50. He’s been homeless since losing his job as a warehouse supervisor four years ago.

“Things just went out of control,” he said. “I hit the streets — it’s been a nightmare since then.’”

He has no interest in returning to city-run shelters. Men familiar with them talk about staff burned out by overwork, and newly arrived clients aghast as their possessions — including their shoes — are stolen.

“A lot of people don’t want to go to them,” Gibbs said. “There are too many fights, too many drugs, too many gangs.”

Gibbs, a native of Trinidad, came to New York as a teenager. The worst part of his life now, he says, is the limited access to bathrooms and showers. He and other regulars of the meal operation at St. Bart’s formerly used bathrooms inside the church; now it’s closed.

“It’s tough, when you turn to the church and they close the doors,” Gibbs said.

The pandemic has posed many new challenges for the Department of Homeless Services, which is battling to minimize the spread of the disease in its shelters. It has moved several thousand single adults into individual rooms, including more than 1,000 hotel rooms. The City Council is pushing a bill that would require individual rooms for all 17,000 single adults.

In all, the city has more than 57,000 people in its shelters, but most are families in accommodations with less risk of coronavirus infection and greater access to bathrooms.

Last week, the city implemented a new plan for reducing the number of homeless people sleeping on the subways, closing end-of-the-line stations overnight, with everyone aboard the late trains required to exit. Evacuated homeless people are offered services by outreach teams, including temporary lodging and medical assessments.

“This has been a heartbreaking experience for all of us,” said the city’s interim transit chief, Sarah Feinberg.

In addition to the city’s shelter system, there are shelters run by charitable organizations, including the Bowery Mission, which has served hungry and homeless New Yorkers since the 1870′s.

Available services include a mobile shower unit. Non-residents who want to use it must sign up at breakfast time and return later in the day.

Among the residents is Kenneth Bovain, 56, who’s been homeless for two years. He hopes to return to work as a truck driver after the pandemic eases.

Another Manhattan shelter, housing more than 100 homeless young people, is run by Covenant House. It has remained fully operational during the pandemic, even while implementing social distancing. Some offices have been converted into isolation rooms, some social workers now conduct “virtual” check-ups, and one of the new activities for residents is making face masks.

“We’re dealing with youth who’ve already been traumatized, and this is further traumatizing them,” said Sister Nancy Downing, executive director of Covenant House NY. “Their fear was that we would close down and leave them.”

Among the many homeless New Yorkers who tried living in shelters and then took to the streets is Kyle Devlin, a 37-year-old former construction worker who now lives in a cluster of tents on a gritty patch of asphalt under the Brooklyn-Queens Expressway.

He says he’s been on the streets for six years, and spoke candidly about his past addiction to heroin and how panhandling was producing less income during the pandemic. He recalled how his world was suddenly upended by the outbreak.

“It was like one night everything changed — everybody just started wearing masks, and you’re not allowed to walk into a friggin’ restaurant to eat,” he said. “All these places that I would normally go and sit down — they’re all shutting down the bathrooms.”

Now, when he does panhandle, he bristles when people tell him to get a job.