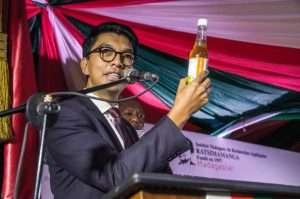 (NEW YORK POST)- Forget remdesivir, a number of African countries are eager to stock up on Covid-Organics, a herbal tonic they consider to be an elixir to cure the coronavirus, according to a report.

President John Magufuli of Tanzania is so intent on getting his hands on the potion, he is sending a plane to pick some up from Madagascar, according to the BBC.

The Republic of the Congo’s President Denis Sassou Nguesso has also promised to import the supposedly magical concoction, which is made from the artemisia plant, the source of an ingredient used in a malaria treatment.

The drink was being marketed after being tested on fewer than 20 people over just three weeks, the Tanzanian president’s chief of staff Lova Hasinirina Ranoromaro told the BBC.

The World Health Organization has warned that there is no proof of any cure for COVID-19 and advised people against self-medicating.

In March, the US-based National Center for Complementary and Integrative Health also warned against supposed coronavirus remedies, including herbal therapies and teas.

But Covid-Organics has been gaining steam in Africa, including in Guinea-Bissau, which obtained a shipment from Madagascar on Saturday, the BBC said.

Madagascar President Andry Rajoelina also said the special envoy to Equatorial Guinea picked up a shipment of the drink.

Magufuli, Tanzania’s leader, said he was in touch with the government of Madagascar and would send a plane to the island nation to pick some up.

“I am communicating with Madagascar, and they have already written a letter saying they have discovered some medicine. We will dispatch a flight to bring the medicine so that Tanzanians can also benefit,” he said.

Magufuli has been assailed for encouraging citizens to continue gathering in places of worship and delaying stricter social-distancing measures in the country, which could have led to the spike in positive cases, according to the WHO.

The country has 480 confirmed cases of COVID-19 but Magufuli said he doubted the credibility of the national laboratory.

He said he secretly had some animals and fruits tested at the lab – and that a papaya, a quail and a goat were said to be infected.

“That means there is possibility for technical errors or these imported reagents have issues,” he said, without elaborating.