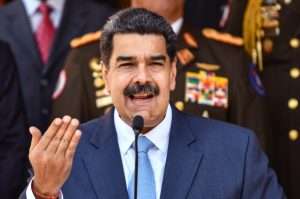 (NEW YORK POST) – Four tons of cocaine worth more than $165 million seized off of the Spanish coast last week has been linked to Venezuelan strongman Nicolás Maduro, US authorities said.

Spanish, Colombian and UK police working in conjunction with the US Drug Enforcement Administration intercepted a ship carrying the drugs 300 miles off the coast of Galicia, in northern Spain. The destination was the port city of Vigo where Spanish cartels were poised to distribute the drugs across Europe, authorities said. The ship, sailing under the flag of Togo, had originated in Venezuela.

Maduro and several members of his inner circle were indicted by a US federal court in March on charges of drug trafficking and money laundering. The State Department offered a $15 million reward for information leading to the Venezuelan leader’s arrest.

Maduro has led Venezuela into economic disaster since taking office in 2013, provoking a mass exodus of millions of Venezuelans. After widely disputed presidential elections in 2018, the US has led countries around the world in demanding he renounce the presidency.