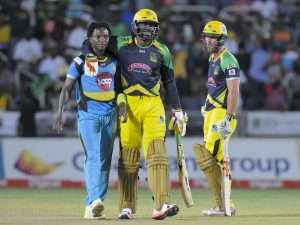 (sportsmax.tv) – The Jamaica Tallawahs have claimed that the decision to not retain Chris Gayle for the 2020 CPL season was strictly business.

The Jamaica-based Hero CPL franchise on Wednesday refuted claims made by Chris Gayle on Monday, that politics and Ramnaresh Sarwan were behind their decision to let Gayle leave for the St Lucia Zouks for the coming season.

Gayle, in a series of videos posted on Youtube on Monday,  suggested that Sarwan, his former West Indies teammate, turned management against him. He said when he refused to back Sarwan’s bid to become team manager, Sarwan sought payback. Gayle called Sarwan a snake and said he was worse than the Coronavirus.

Gayle also said he believes that accepting an invitation from Guyana’s Minister of State Joe Harmon in 2018, also played a part in the decision to let him go.

However, in a statement released early Wednesday, the Tallawahs said Gayle’s comments were far off base and that they are only focussed on rebuilding a team that disappointed during the 2019 season.

“The ownership and management of the Jamaica Tallawahs was disappointed to see the comments made by Mr Christopher Gayle about his departure from the Tallawahs, as we would much rather have had these discussions in private,” the statement said, explaining that Sarwan did not play a role in any decision affecting the self-styled ‘Universe Boss’.

“Mr Gayle gave several reasons for the decision that was made not to retain him in the Tallawahs. However, the truth is that this decision was made collectively by the ownership and management team, which did not include Mr Ramnaresh Sarwan, and based purely on business and cricketing reasoning.”

The Tallawahs also dismissed Gayle’s claim about him being targeted because of perceived political connections.

“Further, the ownership and management of the Tallawahs have no political affiliation with any political organization in any country of the Caribbean,” the statement said.

“The Tallawahs had a very disappointing season in CPL 2019, where the team finished last in the tournament. The ownership and management team has exercised its rights in the selection of players for CPL 2020 for the betterment of the team.

“The ownership and management of the Tallawahs will not be making any further comment on this matter as we are focusing on building the team for the future.”