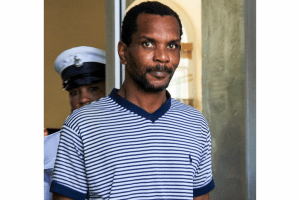 (SEARCHLIGHT) – A man who tried to get married a second time without going through the trouble of divorcing his first wife has been fined and must commit to walking the straight and narrow for one year or risk jail.

Justice Brian Cottle has imposed a suspended jail sentence on Brent Samuel, a 35-year-old resident of Ottley Hall for the crime of attempted bigamy; meaning that there is a one year, three month and 20 day jail term waiting in the wings for Samuel should he breach the conditions surrounding its suspension.

Furthermore, Samuel also pleaded guilty to giving false information to a public servant, and has been fined $3000 for this offence, which he must pay by July 31.

These sentences come nearly a year and a half after police disrupted the nuptials of Samuel to his second intended bride.
Prior to the wedding day, on November 22, 2018, the ‘bachelor’ paid a visit to the office of the registrar of the High Court and lied his way to receiving a license to wed.

However, the wedding bells did not go unnoticed by his wife, who although estranged was still legally married to Samuel at the time.

She therefore reported the true situation to the Registrar, who in turn inform ed the police.

On December 8, at 9 o’clock on the morning of the marriage ceremony, the police officers visited Samuel’s home where they found his bride-to-be already dressed in her white gown and in the company of other members of the bridal party. The bride told the police that she was to be married in one hour’s time at Buccament.

Therefore, the police travelled to Buccament where they found Samuel’s mother, who admitted that she was there for the wedding of her son. Finally, the officiating minister made his appearance while the police were there, and he confirmed that he had counselled the couple, and that Samuel told him he was single and had no children.
Samuel has children with his first wife.

However, the groom was not at the venue as yet, and so the police set out once more in search of him. They found him, with his eldest son who was all dressed in white. Another all-white suit was found in the knapsack that Samuel was carrying, which he admitted to the police was his wedding suit.

He was arrested and taken into the custody of the police. In an interview he admitted to lying in order to obtain a marriage license knowing that it was not lawful to go through a wedding ceremony while being married to someone else.
His explanation was that he intended to delay the registration of his second marriage until after he was able to divorce his first wife.

After pleading guilty to the two offences, Samuel, represented by attorney Jamali John, was remanded in jail for a week before he returned to the High Court this Monday, April 27, 2020.

He faced a maximum of seven years imprisonment for attempted bigamy, and three years incarceration for giving false information to a public servant.

The judge told Samuel “I’m hoping that you’ve spent your time during that week reflecting on the things that you have done and the penalties with which the law prescribes,” which Samuel responded that he had done.

The judge took into account that Samuel had got married when he was only 19 years old.

“His wife explained that they were churchgoers and she felt obligated to do the right thing when she discovered that she was pregnant with their first child,” Cottle noted.

However, the couple physically split seven years later, and while Samuel maintained his children for a while there came a point when his wife was left to “bear the burden” of raising their children.

Samuel apparently kept telling his wife he was trying to get a divorce, and had engaged a lawyer to file a petition for divorce. Nonetheless, he ended up retracting the petition saying that he thought the process was beyond his financial means.

“In this case the prisoner was already separated from his wife she had moved on with her life. This prisoner cannot be described as a danger to society,” Cottle concluded in analysis.

He added that the court takes into consideration the conditions at Her Majesty’s Prisons, which are unpleasant and overcrowded. Furthermore, the Justice indicated that he was “alive to the financial difficulties” that Samuel faces.

Recalling that Samuel had been imprisoned for a short period, the judge stated: “I feel that this experience would have served him well and it would have convinced him that his behaviour is unacceptable.” In light of this, he chose to suspend the jail term.

After imposing penalties for the crimes, Cottle reiterated to Samuel: “I don’t think I need to tell you that what you did you should not have done.”