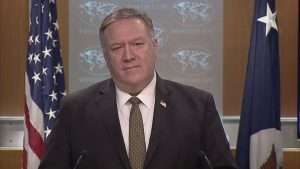 The investigation is a sign of President Donald Trump’s new hard line on China amid questions about his own response to the pandemic. After initially praising Xi Jinping and his government’s “transparency,” the president has now even suggested his administration would seek compensation from Beijing.

Secretary of State Mike Pompeo once again played the role of attack dog Wednesday, accusing China of spreading disinformation and covering up details of the outbreak and calling into question the safety of Chinese labs — fueling the unproven theory that the first case of COVID-19 came from a biomedical lab in Wuhan, China.

Pompeo had labeled the pandemic the “Wuhan virus” in an effort to make clear where the outbreak began, according to a State Department official, as the arms of Chinese government propaganda cast doubt on whether it originated in Wuhan and even blamed the U.S. military for starting it. But after a March 27 call between Trump and Xi, that accusatory tone was softened, with Pompeo not even directly referring to China when calling for transparency or accusing governments of disinformation.

It’s unclear what’s behind the return to an aggressive tone in recent days. Critics of the Trump administration have accused the president of shifting blame to other targets, including the media, the Obama administration, Democratic lawmakers and the World Health Organization as the outbreak in the U.S. worsened.

At the White House Monday, Trump said his administration was looking at ways of holding China financially responsible for the pandemic and the economic damage it has caused after countries closed borders, trade halted and governments implemented stay-at-home restrictions.

The Chinese government has rejected the idea that it owes any money, including lawsuits by individual Americans and the states of Missouri and Mississippi — and Trump didn’t specify how he would force it to pay.

Ordering intelligence agencies to investigate could be the first step toward building some kind of case against Beijing — a fierce form of retaliation that the president has so far saved for the World Health Organization. His administration halted further U.S. funds to the United Nations agency even though it has no authority to do the things Trump and Pompeo have said it failed to do.

“As the president has said, the United States is thoroughly investigating this matter. Understanding the origins of the virus is important to help the world respond to this pandemic, but also to inform rapid-response efforts to future infectious disease outbreaks,” White House Deputy Press Secretary Hogan Gidley said in a statement Wednesday.

But critics point out the U.S. doesn’t need an intelligence review of WHO to find out what it knew when. U.S. officials were part of the WHO expert team that traveled to China after Beijing finally gave WHO permission at the end of January, a State Department spokesperson told ABC News. There are also American officials who work at the organization’s headquarters in Geneva, Switzerland, as part of the U.S. mission to the agency.

“We simply insist that they fulfill their missions, including demanding full transparency and information sharing and a willingness to speak the truth and hold member states accountable when they fail to comply,” the spokesperson said of WHO, even though — according to its bylaws — the agency is severely limited in what it can say beyond what data it gets from a member state.

WHO’s director-general Dr. Tedros Adhanom Ghebreyesus again defended the organization on Wednesday, telling reporters, “From the beginning, WHO has acted quickly and decisively to respond and to warn the world.”

In his press conference Wednesday, Pompeo also demanded that the Chinese government provide access to its biomedical labs to international inspectors, including from the U.S.

“There are multiple labs that are continuing to conduct work on contagious pathogens inside of China today, and we don’t know if they are operating at a level of security to prevent this from happening again,” he said.

He didn’t say whether the U.S. had submitted a formal request to China for such inspections, which would likely come from the U.S. Centers for Disease Control and Prevention to China’s CDC. The U.S. CDC has not responded to a request for comment.

Several of China’s labs work with their counterparts in the U.S. and elsewhere, including the Wuhan Institute of Virology, which Pompeo has implied may have caused the outbreak by accidentally infecting personnel.

Several public health and epidemiological experts have told ABC News it is “vastly more likely” that the first infection — what’s called “zoonotic spillover” — occurred in the wild, given the “huge barriers between people and viruses in the laboratory setting,” according to Dr. Christine Johnson, director of the U.S. Agency for International Development’s Predict project and a professor at UC Davis School of Veterinary Medicine.

Pompeo’s attacks have earned him vitriol from Chinese state media. In an extraordinary op-ed on its evening newscast, which has over 100 million viewers a night, CCTV called the top U.S. diplomat “a public enemy of mankind” for spreading “political viruses,” playing “tricks” and interfering “with international public health cooperation.”