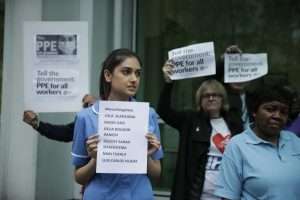 (AP) — The U.K. held a minute’s silence Tuesday for all front-line workers who have died from the coronavirus, as official figures showed a new weekly high in the total number of deaths in England and Wales.

As clocks struck 11 a.m., senior political leaders, including Prime Minister Boris Johnson, joined hospital and nursing home staff in observing the silence. London’s subway and bus networks came to a halt as workers honored colleagues, and Westminster Abbey paid tribute to “the sacrifice of health and care workers who have lost their lives in the service of others.”

On Monday, Health Secretary Matt Hancock said 82 workers in the National Health Service and 16 social care staff had died so far. Other workers, including a number of bus drivers in London, have also died after testing positive for COVID-19.

The minute’s silence had been campaigned for by the Unison union, the Royal College of Midwives and the Royal of College of Nursing.

Donna Kinnair, chief executive and general secretary of the Royal College of Nursing, said it was “important to pay tribute” and urged all front-line workers be “afforded the greatest protection.” The government has been criticized for not having sufficient supplies of personal protective equipment.

“An even greater task now remains — to stop more joining the tragic number of those who have died,” she said.

Johnson, who returned to work on Monday after recovering from COVID-19, tweeted that the country “will not forget you.”

Johnson has said he won’t risk a second peak in the virus by relaxing the lockdown restrictions too soon. The country, he said, was at the point of “maximum risk” even though it was coming out of the “first phase of this conflict.”

Ministers have been reluctant to talk about easing the restrictions, which are due to last until May 7, and the government has set five tests before contemplating such a move, including “a sustained and consistent” fall in the daily death rate and clear evidence that the rate of infection has decreased.

Though England, Northern Ireland, Scotland and Wales moved into lockdown together, some divergences are emerging. Scottish First Minister Nicola Sturgeon said her government was recommending the use of face coverings in limited circumstances, such as when using public transport or buying food. The U.K. government hasn’t made such a recommendation.

The Office for National Statistics also said Tuesday that 22,351 people in England and Wales died in the week ending April 17, the highest since comparable records began in 1993. The total was more than double the rolling five-year average.

In its analysis of death certificates, which take longer to compile than deaths recorded in hospitals, the statistics agency said the coronavirus was mentioned as one of the causes of death in 8,758 cases, nearly 40% of the total.

It also said that 4,316 deaths involving COVID-19 had been registered up to April 17 outside of hospitals with 3,096 in care homes. The equivalent figure for hospital deaths over the period is 14,796.

The daily figures presented by the government only show the number of people dying in U.K. hospitals, including those in Scotland and Northern Ireland. As of Monday, 21,092 people had died in U.K. hospitals.