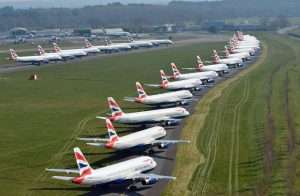 (CNN) – British Airways may be forced to cut more than a quarter of its workforce as the coronavirus pandemic takes its toll on one of Europe’s biggest airlines.

Parent company IAG (ICAGY) said in a statement Tuesday that British Airways is notifying labor unions about a restructuring program which will affect most employees and “may result in the redundancy of up to 12,000 of them.”

IAG, which also includes Spanish airline Iberia, said its first quarter revenues declined 13% to €4.6 billion ($5 billion) as it swung to an operating loss of €535 million ($579 million). The airline group warned that losses in the second quarter would be “significantly worse” and that it expects that “the recovery of passenger demand to 2019 levels will take several years.”

“The majority of the reduction in IAG’s operating result was incurred by British Airways, followed by Iberia and Aer Lingus, while Vueling experienced a modest increase in operating loss,” IAG added.

Flight bans and nationwide lockdowns are threatening to bankrupt airlines around the world. Some have sought government bailouts as they buckle under the financial strain.