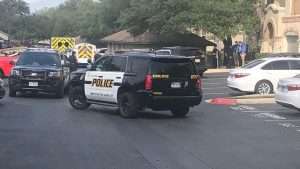 (NY DAILY NEWS) – A Texas woman who “very recently” lost custody of her young children fatally shot both of them and her own mother before killing herself inside their San Antonio apartment, police said Monday.

Her exact motive was not immediately clear, but authorities believe the woman was supposed to turn her 3-year-old daughter and 5-year-old son to their father following a recent court order, Police Chief William McManus said at a news briefing.

The children’s father, who was trying to get in touch with the family, called 911 after seeing their bodies through a window crack in the back of the apartment around 8:30 a.m. Monday, McManus said.

“It’s tragic beyond words,” the chief told reporters outside the apartment complex.

The woman was 38 and her mother was 68, but authorities have not released any names.

Detectives are also trying to determine when exactly the murder-suicide took place and what led the woman to murder her own family and take her own life.

No other details were immediately available.