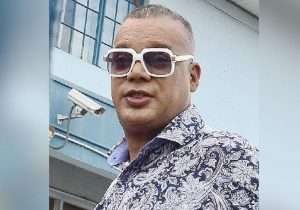 “They discharge me, CARPHA now call and give them the results, it negative. I feeling real good, I get my results, everything good, official document everything saying my both tests negative,” he said in a telephone interview with the Express.

Alleyne said he was waiting to be picked up from the Home of Football hotel in Couva and finally go home.

There was drama over Alleyne’s discharge last week after he was told he can go home and then again told he had to stay as there was an error with his test results.

There was also a mix-up with the test results of a second Caura hospital patient who was later discharged.

Alleyne was moved from the Caura hospital to the Home of Football hotel on Wednesday night.

Although his stay there was short, other patients are grateful that he spoke out on issues at the step down facility — in particular being confined to their rooms.

After doing a Facebook Live video from the hotel yesterday, Alleyne spoke about no water, poor food and being confined to a room.

Following this, COVID-19 patients at the facility were told they could go out into the sun and walk on the fields.

“At around 3.30 p.m. the nurse came and said Mrs ** (name withheld) patients can come out and go in the Savannah. She said the Army will be around so don’t think about running away,” said a patient who was moved from the Couva hospital to this facility on Monday night.

The patient said she was also relieved that the water woes they experienced yesterday because of issues with a pump were resolved.

“I’m glad that he (Alleyne) can be vocal about these things because we are afraid of being victimised, imagine only after he open his mouth we get to come outside, I have been in this room three days straight,” said the woman.

She said patients have their own hotel rooms while some share with relatives who are also COVID-positive.

The woman said she was grateful to be able to go outside and walk and expressed concern about patients being injected with Clexane, a medication which helps to reduce the risk of blood clots.

She also criticised the meals.

“The food is horrible and an investigation should be done on how much they paying for that because it is not a balanced, nutritious meal and certainly not what you give to people with diabetes and high blood pressure and I can tell you most people in here have those issues,” said the patient.

The patient said further that all patients are concerned that their tests results are not being returned in timely manner and they’re not being re-tested.

“I had my test on April 15 and I don’t know what the results are to date,” she added.

Speaking to the Express earlier before he was discharged, Alleyne said he did not understand why COVID-positive patients were taken from Caura to the hotel.

He said among the patients was a child who has to suffer being placed in a “hot room” with no air conditioning and water.

The Express was told that the water issue was fixed and water returned in the evening.