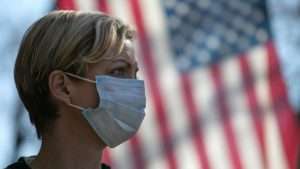 (BBC) – The US virus death toll has surpassed 50,000, according to data from Johns Hopkins University, in what is the world’s deadliest Covid-19 outbreak.

But the US still has a lower mortality rate than most European nations based on current case counts, as the White House task force has emphasised.

The grim news comes as parts of the US reopen after weeks of lockdown.

Some hair salons, bowling alleys and other businesses are opening on Friday in Georgia, Alaska and Oklahoma.

The US has by far the highest death toll and case count in the world.

However, it has a population of 330 million, much higher than other worst affected countries such as Spain and Italy.

Dr Deborah Birx, an expert on the White House Covid-19 task force, has said the country has “one of the lowest mortality rates in the entire world”.

On a per capita basis, the reported US death rate of 1.4% is lower than Spain, Italy, France, Belgium and the UK.

A grim report – but not the whole picture

The US is top of the grim league table for reported coronavirus deaths, but that’s not the whole picture.

But beware of comparing huge countries in this way.

The picture in New York is very different to the picture in the rest of the US and the same goes for other countries.

Italy really has two epidemics – one in the north of the country that overran healthcare and another down south that is much less advanced.

Death rates also depend on how you count – France’s and Belgium’s figures include suspected Covid cases, making their figures look a lot worse.

Recent steep rises in the daily US death toll are also partly due to the inclusion of “probable” virus deaths.

The US Centers for Disease Control on 14 April said their case counts would include both confirmed and probable cases and deaths.

A probable Covid-19 death is one that meets clinical and epidemiological criteria but has not been confirmed by testing.

It is also important to note that many mild Covid-19 cases remain unreported, so the death rate from confirmed cases is not the same as the disease’s overall death rate.

Testing efforts are key to tracking the actual mortality and spread of the disease.

Vice-President Mike Pence, the taskforce leader, said the US has conducted 4.9 million tests thus far, and is working with governors to expand testing.

It is the fourth Covid-19 relief package passed by Washington, and also allocates funds towards hospitals and a small business loan programme.

President Donald Trump signed the bill into law on Friday, saying he wanted to “rush economic relief to our citizens”.

What’s the current situation in the US?

The rising death toll comes as several US states are beginning to ease economic restrictions, despite warnings from experts and President Donald Trump.

In Georgia, which has one of the fastest re-opening timetables in the country, bowling alleys, spas, hair and nail salons, tattoo parlours and other personal care businesses will be allowed to resume operations.

On Monday, Georgia will allow dine-in restaurants and theatres to re-open.

During Thursday’s task force briefing, Mr Trump said he “wasn’t at all happy” with the state’s Republican Governor, Brian Kemp, nor were his team of experts.

“I want the people in Georgia to be safe,” the president said. “And I don’t want this thing to flare up, because you’re deciding to do something that is not in the guidelines.”

Mr Kemp, after Mr Trump’s criticism, has tightened some of the sanitation and social distancing requirements for restaurants.