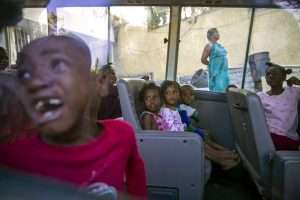 (AP) — For a limestone mantel from the Waldorf Astoria, the church that owns the Olde Good Things antique stores asks for $8,500.

But for the death of each child in a fire at a home it ran in Haiti, the same church offered to pay just $50 to $100 in family compensation — along with $150 for funeral-related costs such as new clothes and transportation.

The wealth of the Church of Bible Understanding in the United States has long stood in contrast with the shoddiness of its two children’s homes in Haiti, which have faced years of infractions and failed two state inspections. But the gap came into even sharper focus on Feb. 13, when the fire killed 13 children and two adult caretakers described by the church’s lawyer as disabled. Authorities suspect the fire started because the home used candles instead of a functioning generator or battery in a country where power failures are frequent.

The deaths have devastated parents like Eustache Arismé, 33. His daughters Nedjie, 4, and Vanise, 3, died in the fire at the home, which is known as an orphanage in Haiti although most children in such homes have at least one living parent.

‘’At first, I was happy to see the children growing up in the orphanage. But now I profoundly regret my decision,” Arismé said. ’

The lawyer for the church, Osner Fevry, said it is being unfairly singled out by critics in Haiti and overseas. Along with compensation and spending money for the parents, the church is assuming the costs of funerals for the 15 victims.

A series of inspections beginning in November 2012 found the homes the church ran in Haiti didn’t meet minimum health and safety standards, with overcrowding, unsanitary conditions and insufficient trained staff. Haitian authorities stripped them of accreditation.

The orphanages failed another round of state inspections in 2017 but stayed open. Haitian child welfare authorities say closing an orphanage can take months or years, particularly if the management has money or influence.

Through its U.S.-based spokeswoman, the church declined to comment on specific allegations of neglect and mistreatment at its children’s homes in Haiti.

“We are devastated by the tragic fire that took the life of our children at our Haitian orphanage. Words would fail to express our immense grief and heartbreak,” the church said in a written statement. “We are taking this very seriously and are moving forward to help all of those affected by this horrific accident.”

On the night of Feb. 13 this year, 61 children were sleeping inside the church’s two-story home in the town of Kenscoff in the mountains above the Haitian capital, Port-au-Prince, according to the Institute of Social Welfare, when a fire broke out after candles were lit in the absence of city power or a functional generator. Thirteen children, ages 3 to 18, died, along with a 39-year-old woman and a 34-year-old man.

Among them was Tania Caristan’s 6-year-old son, Ricardo.

Caristan makes a living selling items on the street and washing neighbors’ clothes. She said she had to leave Ricardo with her estranged husband when he was still a toddler.

It was only two months later that she learned her former husband had put the boy in a Church of Bible Understanding home. Shocked, she went there with a copy of the birth certificate to get her baby back.

But a white man told her through an interpreter that she couldn’t take him because she was not one of the people who had given him to the orphanage, she said.

“I tried everything I could to convince the person in charge at the orphanage,” she said quietly. “I cried bitterly.”

Through its spokeswoman, the church declined to comment on Caristan’s story.

Haitian prosecutors have begun a criminal investigation into the church’s homes, which held 154 children at the time of the fire, according to the national child-welfare institute.

Some children raised in the orphanages say they were generally treated kindly. Others describe conditions as mentally and physically abusive, including social isolation and beatings.

Anaika Francois, 19, told The Associated Press that she entered the homes at six and children with bed-wetting issues from about that age were physically punished. In bad cases, they were stretched across a table and spanked by the monitor or head of the orphanage, she said.

’That would often produce marks, in which case the monitor would give you a bath with warm salt water,” she said.

The church declined to comment specifically on former residents’ allegations.

The Church of Bible Understanding has a thriving online business and retail shops in New York, Los Angeles and at the headquarters in Scranton, Pennsylvania. They cater to the market for antique and vintage home décor, offering such items as crystal chandeliers for as much as $22,000.

A former accountant for the company, Rashida Lovely, says senior managers of the company were church members and lived in church housing. Lovely said older members of the church were doing most of the group’s work in Haiti.

“They did the best they can do up until now,” she said. “They are too old to be doing it anymore.”