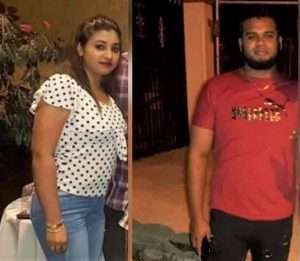 They have been identified as Vishal Chitbahal, 25, and his 23-year-old sister, Vishanie.

The siblings lived with their parents.

Police said the family was asleep when two gunmen entered at around 1am.

The men woke up the family and ordered them into the living room.

Police said the woman was shot first in the head. She collapsed and died at the scene.

Her brother was also shot in the head.

The parents were spared.

Police said the men then ran out of the house and escaped in a waiting car.

The parents raised and alarm and neighbours contacted the police.

Vishal Chitbahal was taken to the Couva District Hospital where he was pronounced dead on arrival.

Police are uncertain whether anything was taken from the family’s house.

And a motive for the shootings is yet to be determined.

A resident, who spoke to the Express on Thursday, said he heard the gunshots but did not investigate until daylight.

“I did not want to come outside. This morning I heard what happened. This is a very sad day for this village. It was not a robbery. Why did they kill these two children?” he said.

Police are yet to determine a motive for the shootings.