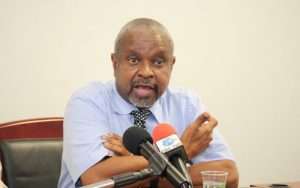 (BARBADOS TODAY) – Six straight days of recording no new COVID-19 cases or deaths ended today with an elderly man becoming the latest person to die from the viral illness, and one new case was also reported, according to the acting Chief Medical Officer Dr Kenneth George.

And he tonight announced that health authorities would be moving to ramp up testing by as much as 1,000 per cent.

Describing today as “a very busy day”, Dr George revealed that the 70-year-old non-national male, who had diabetes died from COVID-19 around 9 a.m. this morning at the Harrison Point facility.

The 66-year-old Barbadian woman contracted the virus after being in contact with a known case on April 14. She is now in isolation.

He said based on her current condition, it was expected that “her course should be satisfactory”.

The health chief said hers was the only new case out of 64 tests conducted yesterday.

And while he noted that two people had been released today from isolation bringing the number of recovered cases to 27, Dr George admitted the death and the new case were setbacks.

“It is with indeed regret and sorrow that we have to report a single new death from COVID-19 in Barbados. This occurred in a 70-year-old male who would happen to be a non-national and had a fairly difficult course which ended with pneumonia and his pre-disposing condition was that he had a chronic noncommunicable disease,” he said during an interview on CBC TV8 tonight.

“This reminds us that we need to keep our guards up…, This is indeed a setback, particularly with the death and also with the new case. What we have attempted to do with the new case is to do extreme contact tracing both with persons in their home environment and outside the home environment to make sure that all potential contacts are identified and we are going to put them in two groups; symptomatic and asymptomatic and we are going to do testing in these individuals.”

With close to 1,200 tests having been conducted so far, Dr George said authorities would be ramping up screenings and testing.

He said patients at the Geriatric Hospital and persons suffering from respiratory illnesses are to be tested, even if they had no travel history.

Dr George said: “We have been telling the public that we are going to increase our level of screening in the population and therefore we have broadened the case definition for persons who meet the criteria. Therefore we are including even persons without a travel history. We are asking for persons with respiratory illness to report at polyclinics where they will be advised on the next steps.

“So we are broadening our testing of the population in general and we hope to go from about 50 tests a day to scale up to as high as 500 to 600 tests a day. It is only when we have widespread testing will we be able to get a good handle of if there is in-country transmission.”

Dr George pleaded with Barbadians to bear with Government during this trying time as they sought to identify all cases of COVID-19 on the island.

He reiterated that the current curfew in place was necessary for authorities to achieve their goals.

He said: “We need to be on our guard and we believe strongly in the Ministry of Health that during this difficult time of shutdown that this is the appropriate way to go…so if you shut down for one to two weeks you don’t get the immediate effect in your numbers, so I would like to encourage the population to bear with us while we further investigate this and to cooperate with us with respect to having more widespread testing done for all persons who present with respiratory symptoms in Barbados.”

He said while most of the cases of COVID-19 were imported, there was one case under investigation where authorities were still trying to determine how that person was infected.