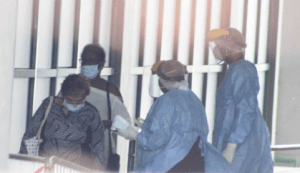 (TRINIDAD GUARDIAN) – The 33 T&T nationals who had been stranded in Barbados since March 23, yesterday arrived back in the country.

However, they will have to wait for another 14 days before they can be reunited with their families.

Unlike the first set of cruise passengers who returned to T&T on March 18 and were quarantined at Camp Balandra, this group will be housed at the Indoor Racquet Centre, Eastern Regional Sports Complex, Tacarigua, where they will be granted access to the sporting amenities during their stay.

The first group of 16 persons arrived at the Piarco International Airport via a charter flight on One Caribbean Airline around 2.05 pm.

Their arrival came almost four hours after their scheduled departure from the Grantley Adams International Airport, Barbados, at 10.15 am.

The second group of 17 arrived in Piarco after 5 pm, although their flight had been scheduled to depart Barbados at 1.15 pm.

The delay resulted after officials in Barbados instructed the 33 that they had to undergo further testing before their departure.

The group was said to have been waiting at the airport when they were informed by Barbados’s Medical Officer of Health, Dr Manohar Singh of the latest development which it was claimed, had resulted from T&T authorities insisting it be done before they could leave that island.

Airline officials yesterday confirmed the group would have undergone rapid testing at the Paragon facility before returning to the airport.

One Caribbean Airline which is based in St Vincent and the Grenadines is comprised of a fleet of a Beechcraft 1900D (18-seater) planes which caters mostly for large group charters.

The first group of passengers was met on the tarmac by local health officials, all outfitted in personal protective equipment who directed them into a waiting PTSC bus, while their luggage was stacked in a covered truck which formed part of the vehicular convoy.

Departing the airport via the private entrance used by the Airports Authority located off Golden Grove Road at 2.38 pm, the group was escorted by two police outriders, an ambulance, marked police vehicles, an unmarked 24-seater maxi, and Defence Force personnel.

Upon arrival at the Racquet Centre – the passengers were off-loaded at the back of the facility where heavily armed police officers and soldiers assisted with sanitising them and their luggage.

The bus used to transport the first group was later seen parked on the far side of the compound after the exercise.

Up to 3 pm yesterday, law enforcement officials were stringing blue tarpaulin along the chain link wire fence in a bid to keep prying eyes out.

On Monday, an attorney representing the group said National Security Minister Stuart Young had granted them an exemption allowing entry.

The 33 nationals who were on a vacation cruise in Dubai before they made their way home via England, were left stranded in Barbados – one day after the T&T Government closed the borders on March 23.

Following their arrival in Barbados, the group remained quarantined at their own expense.

Prakash Ramadhar claimed it had cost the group US$25,000 to charter the plane to get home.

He said they agreed to undergo screening and testing and also to be quarantined upon their return to T&T, even though they had been subjected to similar protocols whilst in Barbados.