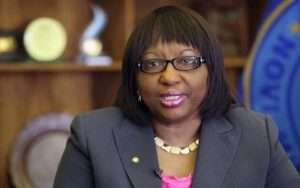 (BARBADOS TODAY) – Pan American Health Organisation (PAHO) officials are eager to see more testing for the COVID-19 virus being conducted in the Caribbean and Latin America.

In addition, PAHO is recommending that governments start putting measures in place to release prisoners if cases are reported in prisons, in an effort to prevent a widespread outbreak in that setting.

The recommendations were put on the table as PAHO held its weekly virtual media briefing on Tuesday.

PAHO Director Dr Carissa Etienne said she was hoping measures implemented in countries were sufficient “to flatten the curve significantly” but suggested that the numbers being recorded were not a true reflection of how widespread the infection was in the Caribbean and Latin America.

“We need a clearer view of where the virus is circulating, and how many people have been infected in order to guide our actions. It is important to accelerate and expand testing to trap the spread of COVID-19 in the Americas,” said Etienne.

“Expanded and decentralized testing will help us better monitor the trends of the pandemic within each country. This also helps governments introduce, reinforce or adapt public health measures such as social distancing. Expanded testing will also allow local health authorities to implement and strengthen contact tracing to quickly isolate suspected cases and to break the chain of transmission in communities,” she said.

Barbados has not reported any community transmission of the viral infection to date. In fact, officials have reported six consecutive days without any positive tests for COVID-19.

While not singling out anyone, Etienne said some countries in the region were finding it “increasingly difficult” to keep up.

“We fully recognise that ramping testing capacity for COVID-19 is a challenge for many countries in our region, which limits effective public health measures and the timely access to health care. This is partly due to the uneven capacity of health systems to quickly process a large volume of tests,” she said, adding that another challenge was the low volume of testing kits being provided by manufacturers as quickly as countries needed.

Etienne said the organisation was working closely with countries to contain the “invisible enemy”, adding that by the end of February PAHO had distributed testing kits and provided training to more than 30 member states.

So far, PAHO has provided more than 500,000 PCR test kits to 34 countries and territories, said Etienne.

“This week we are dispatching 1.5 million more PCR (Polymerase Chain Reaction) tests throughout the region, followed by another three million next week to strengthen laboratory surveillance in our member states. To address the market shortage we are working with leading manufacturers to make this test available through the PAHO strategic fund,” she said.

The PAHO official recommended that countries expand their lab capacity to speed up testing for the viral infection by using “all of the public and private laboratory available at the national level”, prioritize according to availability and ensure that testing was available to everyone free of cost.

“We need to expand access so that everyone who needs a test gets one. PAHO will continue to work with member states to make these recommendations a reality,” she said.

PAHO’s Director of Communicable Diseases Dr Marcos Espinal said the monitoring of prisons was critical during the pandemic, adding that PAHO was aware that some regional authorities have been discussing the possibility of control measures for an outbreak of COVID-19 in prisons.

Adding that prisons in the region were overcrowded, he recommended several “key areas where countries need to accelerate action”, including providing information and communication to prisoners and prison workers and ensuring that hygiene practices are adhered to.

“It is also recommended to reduce overcrowding in the prison system such as freeing prisoners that haven’t committed major crimes, let’s say early release. Also those in pre-detention trials to be released or isolated in other centres,” said Espinal.

“We know of countries that are also preparing to release people with health conditions who can be released early with the use of electronic means. These are the types of measures that need to be implemented.

“Finally, communication inside the prison and social distancing can also be maximized if we try to reuse and rehabilitate other centres for isolation,” he said.

Pointing out that PAHO was monitoring the situation in each country, Espinal said he was aware that in addition to the prison system, countries have discussed measures for nursing homes, and day care and nurseries.

PAHO officials also recommended that countries provide testing for migrants and other vulnerable groups at their request.

They also cautioned against lifting restriction measures too early, including physical distancing, saying this could result in new widespread outbreak of the virus and major disruption to health systems.