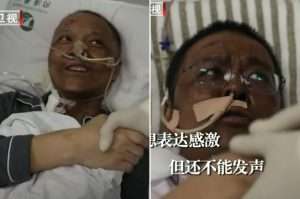 (NEW YORK POST) – Two Chinese doctors who were infected with the coronavirus while treating patients in the epicenter city of Wuhan survived the deadly illness – but their skin turned very dark after they were placed on life support, according to a report.

Dr. Yi Fan and Dr. Hu Weifeng, both 42, were both diagnosed with COVID-19 on Jan. 18 while working at the Wuhan Central Hospital, the UK’s Metro reported.

The gravely ill physicians were taken to the Wuhan Pulmonary Hospital and then transferred twice, according to state broadcaster CCTV.

The two men’s changed skin color was attributed to a hormonal imbalance after their livers were damaged by the bug, Chinese state media reported.

But one doctor suspected that their skin turned dark due to a specific drug they received at the beginning of their treatment.

Yi, a cardiologist, was hooked up to an ECMO (extracorporeal membrane oxygenation) life support machine for 39 days.

The machine, which is similar to the heart-lung bypass machine used in open-heart surgery, pumps and oxygenates a patient’s blood outside the body.

“When I first gained consciousness, especially after I got to know about my condition, I felt scared. I had nightmares often,” Yi told CCTV from his hospital bed.

Hu, a urologist, has been bedridden for 99 days and is still very weak after undergoing ECMO therapy from Feb. 7 to March 22, according to his physician, Dr. Li Shusheng.

He only regained his ability to speak on April 11, said Li, who added that the doctors’ normal color is expected to return when their liver functions improve.

Yi and Hu both worked with whistleblower Dr. Li Wenliang, who was punished for sounding the alarm over the coronavirus and died of the illness on Feb. 7.

Both men are receiving mental health support as a result of their traumatic experiences.