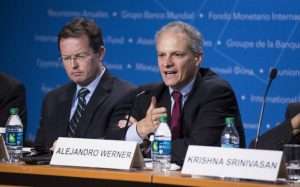 (CMC) — A senior International Monetary Fund (IMF) official has warned that Latin America and Caribbean (LAC) countries face the spectre of another “lost decade” during the 2015–25 period, due to the novel coronavirus disease (COVID-19) pandemic.

“While the pandemic continues to spread across the region, countries are facing the worst economic recession since countries started producing national accounts statistics in the 1950s,” he wrote.

“The challenging external environment, coupled with much-needed measures to contain the pandemic, have led to a plummeting of economic activity across Latin America — where growth is poised to contract by 5.2 per cent in 2020.

“Given the dramatic contraction in 2020 and as countries implement policies to contain the pandemic and to support their economies — as emphasised in our previous blog — a sharp recovery in 2021 can be expected,” Werner said, adding, “Yet, even under this quick recovery scenario, the region faces the spectre of another lost decade during 2015–25.”

With atypical supply and demand shocks, a health crisis, and high financing costs across the region, the top IMF official said the required actions to mitigate the human and economic costs of this crisis will be “quite daunting and will require an unprecedented approach”.

Although, he said, by now, with varying levels of urgency, most countries in the region have taken significant public health measures to contain the spread of the virus, such as social distancing and restrictions on non-essential activities.

Werner said regional countries have also increased the amount of fiscal resources allocated to health care, including tests, beds, respirators, and other equipment, “which is an overarching priority given that many countries are still underprepared to face the worst of the pandemic”.

On the economic policy front, he said actions have varied, stating that countries have relied on direct transfers to vulnerable households (including an expansion of existing programmes), relaxation of access requirements and expansion of unemployment insurance schemes, employment subsidies, temporary tax breaks and deferrals, and credit guarantees.

Werner noted that central banks in the region have reduced policy rates and taken measures to support liquidity and to counteract “disorderly conditions” in domestic financial markets.

To ensure adequate liquidity conditions, he said, some central banks have expanded the size of their liquidity provision operations, sometimes also allowing the participation of non-bank financial intermediaries and the use of highly rated private sector securities.

Moreover, Werner said, bank regulators have taken a number of measures to facilitate the continued provision of credit in an “uncertain and recessionary environment”.

“They have made regulations less stringent, including by lowering reserve requirements, loan loss provisions, and allowing the drawdown of countercyclical capital buffers on a temporary basis to facilitate the rollover and/or restructuring of existing loans,” he said.

“While we are in uncharted territory and policy responses are still evolving, policymakers are facing significant implementation challenges,” he said.

For example, Werner said regional governments might be unable to reach vulnerable households through traditional transfers, “where there are no extensive social assistance systems already in place and where informality is prevalent”.

Moreover, he said, smaller firms and those in the informal sector are harder to reach.

“Given the high level of informality in the region, countries should use all possible registries and methods to reach smaller firms and informal workers and firms,” he urged.

Additionally, given that the pandemic, the recession, and the required policy responses will cause significant increases in public deficits and debt, the IMF official further urged regional countries to create fiscal space in the budget by reducing non-priority expenditure and increasing the efficiency of spending.

“Countries will need to ensure that policies taken in response to the crisis are not perceived as permanent and become entrenched and generate distortions — especially regarding targeted assistance to certain sectors,” Werner said.

He said several countries with fiscal rules on permissible deficits and/or on how much their governments can spend have “rightly invoked escape clauses to allow for extraordinary increases in government spending and deficits”.

But, he said, policymakers should communicate “a clear path back towards compliance with these rules over the medium term”.

To provide much-needed additional revenue to help finance all these initiatives, Werner said increased taxation of petroleum products, at a time when world prices are lower, “could be appropriate insofar that they do not increase domestic prices to end users.

“Moreover, the tension between what is needed and what is possible is also subject to change by policy action,” he said. “Those countries that can credibly commit to a sustainable fiscal policy, by changing their tax, expenditure, and fiscal frameworks that guarantee corrections once the economy is back on track, will unlock significant fiscal space in the present to address the fallout.”

Werner said several countries in the region will not be able to access sufficient resources on their own to cover the large external financing.

So far, out of close to 100 countries that have requested emergency financing from the IMF; he said 16 are from Latin America and the Caribbean.

Additionally, he said other Latin American and Caribbean countries have requested new programmes or the augmentation of existing ones.

Werner said that since this is an unprecedented crisis, the IMF is “actively engaged and fully committed to help our member countries fill this gap through several tools”.

These include using its US$1-trillion balance sheet, expediting the approval of lending facilities, increasing the limits of existing facilities, and providing debt relief to the poorest and most vulnerable member countries hit by the pandemic under the revised Catastrophe Containment and Relief Trust.

Besides the emergency facilities, Werner said the fund is ready to deploy its more traditional arrangements, such as stand-by and extended fund facilities, as well as its contingent credit lines, such as flexible credit lines and precautionary credit lines.

He said as IMF Managing DirectorKristalina Georgieva has noted, “saving lives and protecting livelihoods ought to go hand in hand”.

“We cannot do one without the other. We at the IMF are working on making sure that there is a strong response to the health crisis, as well as protecting the strength of economies,” Werner added.