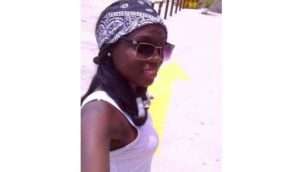 (NEWS ROOM GUYANA) – A mother of two tragically lost her life after she was brutally stabbed by the father of her children on Thursday afternoon at her Lot 301 Ithaca, West Bank Berbice, Region 5 home.

Dead is 21-year-old old Vanessa Benjamin. Her 56-year-old mother, Debra Anibal who came to her rescue, was also attacked and is currently hospitalised at the New Amsterdam Hospital.

The 24-year-old suspect attempted to kill himself by inflicting stab wounds to his body; he too is warded at the New Amsterdam Hospital.

The News Room understands that at approximately 17:30hrs on Thursday, Benjamin who resided with her mother at Ithaca, was at home when the suspect approached her and an argument ensued during which she was stabbed multiple times about the body.

Her mother attempted to intervene but the suspect spared no effort in turning his attention to the woman and stabbed her several times.

Moments later, he used the same weapon and stabbed himself.

Benjamin, her mother and the suspect were taken to the Fort Wellington Hospital where Benjamin was pronounced dead on arrival.

Her mother and the suspect were treated and subsequently transferred to the New Amsterdam Hospital where he remains under Police guard.

Both of their conditions are listed as stable.

This the second murder of a young woman in the past week. On April 11, the battered body of Deveika “Vanessa” Narinedatt was discovered in a blue plastic barrel that was submerged in a trench at R and S Street, Belvedere, Corentyne Berbice.

Diligent work by Police in the region led to the arrest of the suspect who was identified as her reputed husband Suraj Veersammy called “Radesh”.