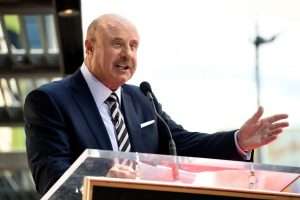 (NEW YORK POST) – Dr. Phil is getting slammed on social media for downplaying the coronavirus, comparing the global pandemic to car accidents, drowning and other accidental deaths — while wildly exaggerating fatality totals.

The television host, whose real name is Phil McGraw, was trending as “Mr. Phil” on Twitter early Friday following an appearance on Fox News Thursday during which he criticized governmental mandates to shut down non-essential businesses.

“The economy is crashing around us and they’re doing that because people are dying because of coronavirus,” McGraw told host Laura Ingraham. “I get that, but look, the fact of the matter is we have people dying – 45,000 people a year die from automobile accidents, 480,000 from cigarettes, 360,000 from swimming pools – but we don’t shut the country for that.”

McGraw continued: “But yet, we’re doing it for this and the fallout is going to last for years because people’s lives are being destroyed.”

But McGraw’s total of 360,000 deaths in swimming pools across the country totally missed the mark, as there were an average of 3,536 fatal drownings annually in the US from 2005 through 2014 — or about 10 per day, according to Centers for Disease Control and Prevention data.

Worldwide, an estimated 320,000 people die from drowning annually, accounting for 7 percent of all injury-related deaths, according to the World Health Organization.

The reaction was swift on Twitter, where McGraw, 69, was denigrated as “Mr. Phil” instead of being referred to his typical TV moniker.

“Phillip Calvin McGraw, also known as Dr. Phil, is an American television personality, author and former psychologist who is the host of the television show Dr. Phil,” one tweet read. “He holds a doctorate in clinical psychology. However, he is not licensed to practice.”

Other critics suggested that McGraw would “be a lot less credible” if he wasn’t allowed to speak in a medical capacity despite not being a physician.

“I think we really need to examine *when* people are allowed to call themselves ‘doctor,’” another tweet read. “Mr. Phil and Dr. Oz would be a lot less credible.”

The uproar comes after similar fallout for Dr. Oz, who said he “misspoke” when he called for reopening schools during the coronavirus pandemic, claiming it would equate to “only 2 to 3 percent” more fatalities. He also made his comments on Fox News, but later posted an apology video to Twitter Thursday.

Another user said McGraw should simply stick to what he knows.