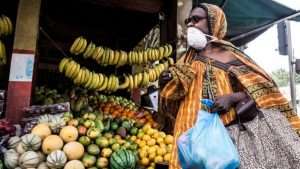 (BBC) – Africa could become the next epicentre of the coronavirus outbreak, the World Health Organization (WHO) has warned.

There was a sharp rise in cases in the past week.

There have been almost 1,000 deaths and almost 19,000 infections across Africa so far, although these rates are far lower than those seen in parts of Europe and the US.

The WHO says the virus appears to be spreading away from African capitals.

It has also highlighted that the continent does not have enough ventilators to deal with a pandemic.

How bad is the situation in Africa?

There are almost 19,000 confirmed cases in Africa and at least 970 confirmed deaths across the whole continent, which has a population of about 1.3 billion.

North Africa is the worst affected region. Algeria, Egypt and Morocco have all had more than 2,000 cases and at least 100 deaths. Algeria has had the most deaths, with 348.

Elsewhere, South Africa has also had more than 2,000 cases, with 48 deaths, while the continent’s most populous nation, Nigeria, has had 442 cases and 13 confirmed deaths out of a population of some 200 million.

Why are there fewer cases compared to Europe and the US?

“If you look at the proportion of people who travel, Africa has fewer people who are traveling internationally,” she said.

But now that the virus is in within Africa, she says that her organisation is acting under the assumption that it will spread just as quickly as elsewhere.

Where is the virus being spread now?

The WHO has witnessed the virus spreading from big cities to “the hinterland” in South Africa, Nigeria, Ivory Coast, Cameroon and Ghana, Dr Moeti said.

There are around 15 African countries where the virus has not spread far so, if these countries adopt strong social distancing measures, they could contain the virus, she added.

How bad could the situation get?

Provisional projections from the WHO suggest that more than 10 million people could be infected in the next 3-6 months, but that figure doesn’t take into account public health measures that are being put in place.

What happens if the virus spreads further in Africa?

If Covid-19 is able to take hold on the continent, the consequences could be far more devastating than we’ve seen in Europe and the US, says our global health correspondent.

Dr Moeti said the WHO was focusing on prevention rather than treating the virus because many African countries don’t have the capacity to treat many coronavirus patients.

“We want to minimise the proportion of people who get to the point of needing critical care in an ICU, because we know that these types of facilities are not adequate by any means in the majority of African countries,” she said.

There are also fears that the disease could spread rapidly in overcrowded areas where it is impossible to practise social distancing and where many do not have access to clean water and soap.

Dr Moeti said the lack of ventilators was “one of the biggest challenges” that African countries are facing.

Why are ventilators so important?

For patients critically ill with Covid-19, access to a ventilator could be a matter of life or death.

The machines get oxygen into the lungs and remove carbon dioxide from the body when people are too sick to breathe on their own.

One of the first recorded deaths from coronavirus in Africa was Zimbabwean journalist Zororo Makamba in March.

The local authorities in the capital, Harare, said that they did not have a ventilator to treat him.

What else is needed to contain the spread?

What is being done?

In some countries, schools are been turned into healthcare facilities where people can be quarantined and even offered care.

Textile industries have been recalibrated to start manufacturing personal protective equipment such as medical gowns.

Earlier this week the UN Food Programme started distributing badly needed equipment around the continent from a new hub in Ethiopia’s Bole airport.