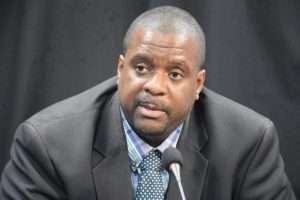 (BVI) – Hairdressers and barbers in the British Virgin Islands have been added to the government’s limited list of critical or key private sector businesses which will be permitted to operate in the territory during the upcoming ‘soft curfew‘ period.

Premier Andrew Fahie made that announcement during a special sitting of the House of Assembly on Thursday, April 16.

Neither hairdressers nor barbers were included on the original list that was publicised on Wednesday. But, Premier Fahie said it was an error.

“I would take responsibility for that and I really thought I had added it on because Cabinet did approve it and I didn’t say it,” Fahie stated.

Backlash from over 100 residents

The Premier also said he had received a great deal of backlash from female residents across the territory following his initial omission of the two cosmetic-related professions.

“I got no less than 120 WhatsApps from ladies and their pictures showing me how their hair is looking; stating if I think I can get away with this,” Fahie said.

“So after getting that kind of body shot all afternoon, I charged my phone really quick and I called the Minister of Health and we saw the Attorney General and we confirmed that it was on, so we made sure that we redid the paper in terms of what is being allowed and put it on,” the Premier further explained.

Let us not win the battle and lose this war

Health Minister Carvin Malone, however, issued strong words of warning to local hairdressers, barbers and their clients. He urged them not to focus on winning the proverbial ‘battle’ and losing the more important ‘war’ against COVID-19.

He urged them to ensure that they practice necessary precautionary measures within their businesses to prevent any chance of transmission of the virus in the territory.

“It is strongly advised that persons venturing into the personal space of others must wear their protective gloves and N95 masks and ensure that equipment and surfaces are constantly sanitized,” Malone stated.

He further appealed to all businesses to install and make consistent use of facilities for hand sanitization, personal hygiene, and physical distancing of at least six feet between persons.

Government said the list will continue to reviewed before this week ends.