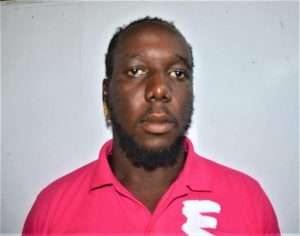 Hullon John is expected to appear before a Scarborough Magistrate today, charged with crimes that allegedly happened on Sunday.

John, 28, a straighter, of Culloden Bay Road, Golden Lane, Tobago, was charged with one count of sexual penetration of a minor and one count of child endangerment, by officers of the Tobago Division’s Child Protection Unit(CPU).

Officers of the CPU were on mobile patrol around 11p.m, on Sunday when they received information from the Tobago Operations Centre relative to a child found in someone’s property.

At the location, they met the 12-year-old.

Investigations revealed she had been invited to a COVID-19 house party with several other persons. During the party, the victim was offered alcohol which she drank and was then sexually assaulted, police say.

She was then dropped off at Store Bay Branch Road, Store Bay, where she was found by a resident.

Officers immediately carried out a search for the suspect and subsequently had cause to stop a motor vehicle proceeding along Store Bay Local Road, with three occupants.

Two of the occupants were released while the third occupant, John, was arrested in connection with the incident.

Investigations were spearheaded by W/Supt. (Ag) George and ASP Nowbutt, while, charges were laid by WPC Small, all of CPU Tobago.