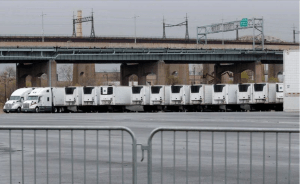 (JAMAICA OBSERVER) – Five nurses and a former director of prisons are among several Jamaicans who have died in the United States as a result of the novel coronavirus pandemic, according to the Global Jamaica Diaspora Council and other well-placed sources.

Three of the nurses worked at health facilities in New Jersey, while the other two were employed at hospitals in New York.

It remains unclear how many Jamaicans have so far succumbed to the virus, as no specific process or entity exists to record the deaths or the number who have contracted the disease by nationality. However, anecdotal information from attorney Wayne Golding, who heads the Global Jamaica Diaspora Council for the southern US, his counterpart Dr Karen Dunkley who is in charge of the north-east US, and long-time Diaspora advocate Irwine Clare put the total number of deaths at 34.

The deceased range in age from 42 to 96, with New York accounting for the bulk of the cases. Several of those who have died fit into the vulnerable categories on account of being elderly and having pre-existing health conditions.

Among them is Joslyn U Dennis, a former member of the Jamaica Defence Force and director of prisons at the Department of Correctional Services. Dennis, who served as chairman of the Ex-Correctional Officers Association of Jamaica Inc, a Brooklyn-based non-profit, died last Wednesday, a few days after testing positive for coronavirus.

The Kingston College Old Boys’ Association (USA ) has, meanwhile, reported seven coronavirus-related deaths among its membership. President Perry Bloomfield told the Jamaica Observer that two other members of the association who contracted the disease “have recovered, while a third, who remained hospitalised, is improving”.

Other states which have registered COVID-19-related deaths of Jamaicans are Maryland, Pennsylvania, and Georgia.

Many Jamaicans are among those on the front line in the fight against the deadly disease, raising fears that the death toll may well be higher or will increase in the coming days.

There are also concerns that Jamaicans could be among the thousands of those who have been buried without being accounted for, as bodies not claimed after six days are buried by the authorities, according to multiple sources.

Golding has also expressed concerns about the economic effect the pandemic is having on some Jamaicans.

“Many will not be able to benefit from the Government’s stimulus package. This is due to the fact that they basically work off the books,” he said.

The situation is also taking an emotional toll on some families. A Queens family has lost one member, while another is hospitalised, and three others are at home battling the disease.

In an effort to help those in need of emotional support, a key member of the Global Jamaica Diaspora Council for the north-east US, Claudette Powell, said the council has established online services which can be obtained by calling 609- 373- 9800 or by visiting its website at www.janed.org and clicking on COVID-19.