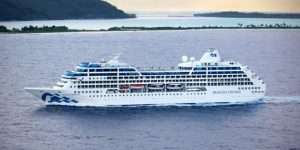 (BUSINESS INSIDER) – Bookings for cruises are already on the rise of 2021, according to multiple indicators, despite multiple outbreaks of COVID-19 on cruise ships in 2020.

In the past 45 days as multiple cruise ships had serious COVID-19 outbreaks onboard and, in many cases, were stranded for days before finding a place willing to let them dock and offload passengers, CruiseCompete.com saw a 40% increase in its 2021 cruise bookings compared to 2019, the company told the Los Angeles Times.

The site’s president said that based on the available data, the demand for booking post-pandemic cruises is still strong, an encouraging sign for cruise lines currently taking a huge financial hit and seeing their market value plummet.

The Times also noted that a recent analysis from Swiss bank UBS found that in the past 30 days, the number of cruise bookings for 2021 are up by 9% compared to the same period in 2020, including a substantial number of people booking brand new cruises as opposed to simply re-booking canceled cruises.

Indeed, UBS reported that 76% of the people who had a canceled cruise in 2020 have chosen to accept credit towards a future cruise in 2021 as opposed to 24% who accepted a refund.

A Harris Poll released March 31 also found that while demand for cruises is still expected to bounce back at a slower rate than for other methods of travel, such as hotel and airline bookings, only 22% of respondents said it would take “a year or longer” before they’d get on a cruise again.

The two biggest outbreaks took place on the Diamond Princess and Ruby Princess cruise ships, both run by Carnival Cruise Corporation. After the outbreaks, Carnival saw its stock price plummet by 80%.

Most recently, the Holland America ships MS Zaandam and MS Rotterdam docked in Fort Lauderdale, Florida after an outbreak onboard the Zaandam sickened dozens of passengers and resulted in four deaths.

In the wake of numerous coronavirus outbreaks onboard, the CDC has banned Carnival, Norwegian Cruises, and Royal Caribbean cruise lines from sailing in US waters until at least July. Those three companies alone represent $60 billion of the cruise line market.

And because the vast majority of the cruise lines are not incorporated or based in the US in order to avoid corporate taxes, the industry as a whole was largely excluded from the $2 trillion economic stimulus package President Donald Trump signed into law in March.

“Cruise lines, as evidenced by the stocks, are in a world of hurt right now without a clear light at the end of the tunnel,” SunTrust Robinson Humphrey analyst Patrick Scholes recently told Business Insider’s Meghan Morris, adding that the “multi-million dollar question” for these cruise lines’ survival is when they can start operations again.

While cruise lines have taken a severe financial hit and will face serious challenges to get back on track after the crisis, the loyalty of their customer base and the rise in bookings even in the midst of a pandemic that spread on cruise ships show a sliver of hope for an embattled industry.