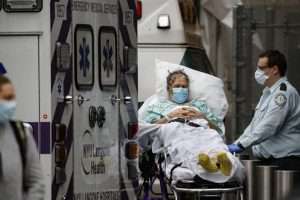 (AP) — New York’s coronavirus death toll topped 10,000 even as the lack of fresh hot spots in the US or elsewhere in the world yielded a ray of optimism and fuelled discussions Monday about how some places might begin to reopen.

The brunt of the disease has been felt most heavily in New York, Italy, France, Spain and the United Kingdom, but grim projections of a virus that would spread with equal ferocity to other corners of America and the world have not yet materialized after more than a month of measures meant to blunt its impact. Even so, the worldwide death toll surpassed two million on Monday (April 13).

The death toll in populous states such as Florida and Pennsylvania was on par with some individual counties outside New York City. Houston, the nation’s fourth-largest city and a hub for immigrant communities and business travellers in the energy industry, has been largely spared compared to other parts of the US. As Colorado deaths surpassed 300 on Monday, Gov Jared Polis compared that figure to New York’s thousands and called it “a tragic indication of our success in Colorado.”

Officials around the world worried that halting quarantine and social-distancing measures could easily undo the hard-earned progress that those steps have achieved in slowing the spread.

Still, there were signs countries were looking in that direction. Spain permitted some workers to return to their jobs, while a hard-hit region of Italy loosened its lockdown restrictions.

Dr Sebastian Johnston, a professor of respiratory medicine at Imperial College London, said it appeared that COVID-19 had peaked in much of Europe, including France, Spain, Germany, Italy and the UK. He was worried the virus might now start to take off in countries across Latin America, Africa and Southeast Asia. There’s also concern about Russia.

Italian authorities announced on Monday that there were 3,153 new coronavirus cases in the last 24 hours, approximately a 1.9 percent increase. That brings the country’s overall toll of known cases to nearly 160,000. The day-to-day death toll, 566, however, was up, from the 431 new deaths registered on Sunday.

Italy’s day-to-day increase in infections was one of the lowest in weeks, bolstering a generally downward trend. Slightly eased restrictions were about to take effect in some sectors of the country, such as allowing stores selling necessities for new-borns to reopen.

The hard-hit Veneto region, which has been credited with a rapid response to the virus that has helped limit the number of fatalities. is entering a phase the governor, Luca Zaia, termed ”lockdown light.”

In hard-hit Spain, workers were permitted to return to some factory and construction jobs as the government looked to restart manufacturing. Retail stores and services were still required to stay closed, and the government required office workers to keep working from home.