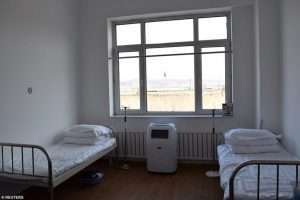 (DAILY MAIL UK) – Workers at a Chinese city bordering Russia have spent six days converting a 13-storey building into a makeshift coronavirus hospital for patients without symptoms as Beijing faces a fresh flare-up in its far-flung north-east.

Russia has become China’s largest source of imported cases, according to state media. Most of the patients are Chinese citizens doing business in the neighbouring country.

The new field hospital has 580 beds and is situated in Suifenhe, a prefecture-level city that shares a 27-kilometre (16-mile) land border with Russia.

Imported cases and asymptomatic patients, who show no symptoms but can still pass the virus on, have become China’s chief concern after draconian containment measures succeeded in slashing the overall infection rate.

With a population of around 70,000 and frozen-in for much of the year, Suifenhe has at least 243 imported COVID-19 cases out of nearly 1,000 confirmed and suspected cases.

More than 100 people in the area have tested positive for the virus but showed no symptoms. Recent arrivals from Russia account for nearly half of China’s imported cases.

On the same day, former epicentre Wuhan, which is more than 2,600 kilometres (1,600 miles) away, saw its restrictions lifted.

Workers and volunteers in Suifenhe started to turn a former office building into a temporary ‘fang cang’ hospital on April 6. The project was largely complete on April 11.

Nine out of the 13 floors of the hospital will be dedicated to treating COVID-19 patients with no symptoms, China Central Television Station reported on Sunday.

Hundreds of medical workers will be sent to the hospital from different parts of Heilongjiang and other provinces.

Workers are ‘further improving’ the facility today, but the hospital can receive patients at any time from now, according to a separate report from the state broadcaster.

The CDC experts have built a negative-pressure-style tent as a temporary lab to facilitate the testing, according to a senior Suifenhe official.

With the number of new cases dropping to zero in China but soaring abroad, China now views the coronavirus as a ‘foreign’ problem and has increased its efforts to screen new arrivals from abroad.

The country last week closed all entry and exit points on its 4,296-kilometre (2,670-mile) land border with Russia to stop the spread of the bug.

The long, porous border of sprawling Heilongjiang province and neighbouring Inner Mongolia has much less travel than major cities like Beijing and Shanghai.

But it is a popular alternative route into the country. Many Chinese live and work in Russia, where China has major investments encouraged by warm ties between Beijing and Moscow.

‘We are facing a truly grave situation in the northeast as represented by Suifenhe,’ National Health Commission expert Wang Bin said Monday at a news conference.

‘Up to now our medical resources in the area have just not been sufficient.’

Roughly 1,300 kilometres (800 miles) northeast of Beijing, Suifenhe’s markets selling warm clothing, cell phones and daily items usually do a thriving business with Russian visitors starved for choice on their side of the border.

That trade has gone quiet in recent weeks, dimming prospects for a sparsely populated region whose residents have been migrating to major cities seeking jobs and better living standards.

Russia requires 14-day quarantines for all travellers arriving in Primorsky Krai and its regional capital Pogranichny, across the border.

It has closed hotels to visitors and is requiring travellers to have a pass showing they are not carrying the virus. Russia closed its land border to travellers from China in January.

On the Chinese side, quarantines have been extended to a full month for people arriving by air in Suifenhe and Heilongjiang’s capital, Harbin.

As Wuhan and other regions get back to business, Chinese authorities say they will remain vigilant against a second wave of infections, particularly from those arriving from outside the country.

New cases of local infection in China have fallen to near zero after more than two months of strict travel bans and social distancing measures.

Of 89 cases reported on Tuesday, all but three were detected in people arriving from abroad. It wasn´t immediately clear if any came from Russia.

No new deaths were reported in the country on Tuesday, suggesting the outbreak is running its course.

Last week, authorities lifted a 76-day quarantine in Wuhan, where the virus was first detected late last year, an indication that the worst may have passed.

China had recorded 82,249 cases and 3,341 deaths as of Tuesday, while 1,077 people suspected of having the virus or testing positive without showing symptoms were under isolation and monitoring.

For most people, the coronavirus causes mild or moderate symptoms, such as fever and cough that clear up in two to three weeks.

For some, especially older adults and people with existing health problems, it can cause more severe illness, including pneumonia and death. The vast majority of people recover.