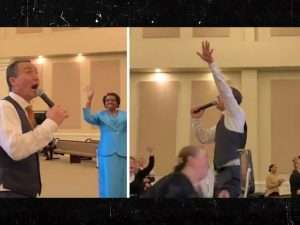 (TMZ) – Pastor Tony Spell held an in-person Easter service, as promised, and says he had more than 1,000 faithful parishioners there … defying Louisiana’s Governor and potentially spreading the coronavirus.

The minister was fired up for his flock Sunday at Life Tabernacle Church, and though he’s previously been arrested for doing this — he opened church doors again to his congregation, but also posted his service live on social media.

Spell claims he had 1,345 in attendance — which he says is higher than his usual turnout. We say claims, because the congregation was rarely shown. We don’t know if it was intentional, but the camera never showed more than a couple of rows of pews.

Most of the shots are of him on stage preaching from the pulpit. You see a few others on stage around him as well … keeping somewhat of a distance. Although, the congregation was hidden from camera view, you can hear there are way more than 10 people present. The state guidelines call for gatherings to be 10 or less, and they have to maintain 6 feet distance.

One brief shot of the pews showed at least a dozen or so people, who don’t seem to be socially distant.

Spell brazenly referenced the CDC’s guidelines while preaching about a victory march for Jesus.

Not really shocking from the man who told us his parishioners would be happy to die from COVID-19 if it meant they could attend church in-person.

As we reported, police said they did not intend to break up the service or arrest Spell on Easter — but would instead monitor the gathering and use it to build a case against him for the District Attorney.

Spell was previously arrested weeks ago for violating the state’s “safer-at-home” mandate.