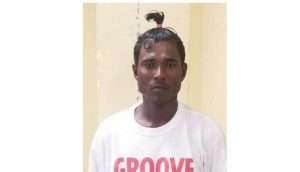 (NEWS ROOM GUYANA) — The Police have arrested the suspect in the murder of the so-far unidentified woman whose battered body was found stuffed inside a blue barrel that was found in a trench at R and S Street, Belvedere, East Berbice Corentyne Saturday.

Suraj Veersammy known as ‘Radesh’, a labourer of Hampshire Village was found by the Police Sunday morning under the Canje Bridge, in Sheet Anchor, East Canje.

Police sources told the News Room that Veersammy was found with injuries to his body; he was taken for medical attention.

The dead woman is believed to be Veersammy’s wife; neighbours said the couple moved into the community three months ago and they always fought.

Police said the woman appeared to be dead for three days before the body was found.

One neighbour who prefers to remain anonymous told the News Room that she last saw Veersammy’s wife on Thursday morning, April 09 wearing a long green and white stripe dress.

At around midday the same day, the neighbour heard the couple arguing and then there was a sudden quietness.

The body appears to fit the description of Veersammy’s wife and it was found in a green and white dress.

Neighbours had indicated to the Police that the couple had two blue barrels in their yard but when Police showed up, only one was found.

The discovery of the partially decomposed body was made on Saturday by Harennauth Yodan, 53, a cane harvester who lives at the property opposite of where the body was found.

Yodan said he went to bed at around 19:00hrs Thursday and when he woke up the next morning, he noticed a blue plastic barrel in the trench in front of his house.

He didn’t think anything was amiss but on Saturday morning when he sat down to have breakfast, he was taken aback by a strong odour.

As such, he decided to check the trench and upon closer examination of the barrel, he noticed a human foot was protruding from the barrel.

The Police were immediately contacted.

The woman was found stuffed head down inside the barrel with a bedsheet tightly tied around her neck; there were marks of violence across the body with injuries to her left eye, stomach, left shoulder, left hand and left leg.

Meanwhile, Veersammy who was employed at a chicken outlet at Fyrish, showed up for work early Saturday morning and asked for money.

He told the owners that he was leaving for Number 63 Village.

The woman’s body is currently at the Bailey’s Funeral home awaiting a post mortem examination.