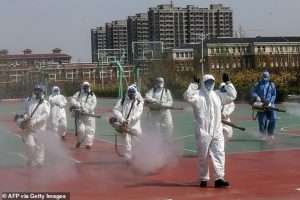 More than 90 per cent of these infected people entered the country from abroad, following the end of travel restrictions.

The northeastern border with Russia has quickly become an access point for the virus to enter, and a frontline in the fight against a resurgence of the coronavirus epidemic.

China has closed all entry and exit points on its 2,670 mile border with Russia after cases began creeping up in the nearby city of Suifenhe.

Elsewhere, authorities have been slowly easing curbs on movement as it tries to get its economy back on track, including in Wuhan, where the coronavirus first emerged.

But officials are treading a very fine line between granting more freedom of movement and guarding against a second wave of infections.

Figures coming from China suggest the country has largely stamped out domestic transmission of the disease.

But it has been accused of covering up the true scale of its epidemic and lying about key information during virtually every stage of its coronavirus response.

The 108 new cases reported on Sunday are up from 99 a day earlier, marking the highest daily tally since March 5.

Cases shot up by 143 on March 5, but have been dwindling ever since, reaching a record low of 11 new cases on March 13.

The total number of confirmed cases in mainland China now stands at 82,160 as of Sunday, and 3,341 people have died.

On the worst day of China’s outbreak, on February 12, there were over 15,000 new cases recorded after officials changed the way data was recorded.

Though the number of daily infections across China has dropped sharply from that peak, China has seen daily new cases creep up again.

It’s largely been blamed on international travel. Imported cases accounted for a record 98 of the 108 reported on Sunday.

The border to Russia is closed, except to Chinese nationals who are crossing into the Heilongjiang province.

The route has become one of few options available for people trying to return home after Russia stopped flights to China except for those evacuating people.

Chinese cities near the Russian frontier are tightening border controls and imposing stricter quarantines in response, as cases in Russia creep up to 18,400.

Suifenhe, a Chinese port city of 70,000 people 1,000 miles from Beijing, went on full lockdown at 6am local time on Wednesday April 8 due to a surge in ‘imported cases’.

Streets in Suifenhe were virtually empty on Sunday evening due to restrictions of movement and gatherings announced last week.

‘Our little town here, we thought it was the safest place,’ said a resident of the border city of Suifenhe, who only gave his surname as Zhu.

‘Some Chinese citizens – they want to come back, but it’s not very sensible, what are you doing coming here for?’

Residents in Suifenhe said a lot of people had left the city fearing contagion, but others put their trust in authorities’ containment measures.

‘If there’s a local transmission, I would, but there’s not a single one. They’re all from the border, but they’ve all been sent to quarantine.’

Authorities in Harbin are also mandating 28 days of quarantine as well as nucleic acid and antibody tests for all arrivals from abroad.

Chinese ambassador to Russia Zhang Hanhui urged the roughly 160,000 Chinese nationals in Russia to remain in their homes in self-quarantine.

Mr Zhang said on April 9 that repatriating such a large number of people in a short period of time was ‘unrealistic’.

The Chinese consulate in Vladivostok, which is about 85 miles from Suihenfe, has warned citizens not to attempt a crossing at this time.

Imported cases are also being reported in Shanghai.

Authorities found that 60 people who arrived on Aeroflot flight SU208 from Moscow on April 10 have the coronavirus, Zheng Jin, a spokeswoman for the Shanghai Municipal Health Commission, told a press conference today.

Transmission of the coronavirus between people in China has reduced massively since Wuhan and 16 of its neighbouring cities in the Hubei province went into lockdown on January 23.

Daily new cases dropped to zero, and the indication that the virus had been contained allowed for the relaxation of lockdowns.

Researchers in Hong Kong have warned that premature easing of restrictions could leave to a second wave of cases because there are still people who have no immunity against the disease.

Kathy Leung of The University of Hong Kong estimated that relaxing draconian measures ‘would increase the cumulative case count exponentially’.

They wrote in The Lancet: ‘Although the aggressive countermeasures appear to have reduced the number of reported cases, the absence of herd immunity against COVID-19 suggests that case counts could easily resurge when these interventions are relaxed.’

The team warned of overseas importation of cases, particularly from Europe and the US, coupled with the return of normal social mixing through work, school and leisure.

As countries across the world battle their ‘first wave’ of the pandemic, there are concerns China is now approaching its second.

The northern hemisphere could face the second wave of its epidemic in mid-summer, another study suggests.

A team led by the London School of Hygiene and Tropical Medicine predicted that if Wuhan lockdown measures are gradually relaxed in March, a second wave of cases might occur in late August.

Such a peak could be delayed by two months if the restrictions were relaxed a month later, in April, giving more wriggle room to find a vaccine or work out stronger strategy to cope with the virus.

Their projections, published in The Lancet Public Health, highlight how important timing is when considering the return of normality.

Wuhan, the city where the coronavirus pandemic began, lifted some travel restrictions last week, on April 8.

But only those who fit a certain health status are able to go out. The government has set up a mobile system in which people can get a green QR code on an app if they are healthy and safe to mingle in society.

Ministers have signed off on GBP200 million of funding for developing countries in a bid to prevent ‘future waves’ of coronavirus infections hitting the UK.

The investment for the likes of the World Health Organisation (WHO) and the Red Cross came as ministers said attention must turn to preventing the virus from overwhelming developing countries.

International Development Secretary Anne-Marie Trevelyan said boosting fragile health systems overseas would help avoid a second wave of coronavirus returning to the UK once the initial peak of infections is over.