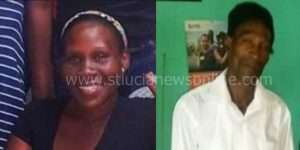 (St. Lucia News Online) — A shooting in the wee hours of Good Friday in Black Bay, Vieux Fort has left a woman dead and her male companion injured, according to law enforcement sources.

The deceased has been identified as Nasha Edwin of Vieux Fort. She was reportedly shot multiple times.

It is alleged that they were in bed when shots were discharged through a window in the home.

The woman died at the scene while her boyfriend, Julien Poleon, was admitted at St. Jude with a gunshot wound to the hip area. His medical status is unknown at this time.

The incident occurred around 3 a.m.

A relative of the male victim described him as a peaceful, humble and hardworking farmer.

“He’s a farmer,” the relative told St. Lucia News Online. “All he does is plant and sell his fruits.”

A source who knows the couple believes the woman was in the wrong place at the wrong time.

“He is a quiet guy, had no drama, nothing bad; a farmer, hardworking — an honest-day-pay-for-an-honest-day-work kind of guy,” the source said.