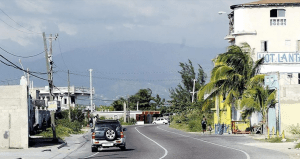 (JAMAICA STAR) – More that a dozen commercial sex workers who operate within Falmouth, Trelawny, say they are now reeling from the effects of the coronavirus, even though the parish is yet to report a case.

With Jamaica’s ports, including the Falmouth Pier closed, and nightly curfews in place, they cannot get customers.

Goodaz told THE WEEKEND STAR that the past two weeks have been terrible.

“A the longest mi eva find myself without a dollar inna mi name,” Goodaz said. “Mi two pickney dem deh wid dem granny a town but a mi still sustain dem, and a nuff money it cost a week time fi mine them, an mi madda. Is like the real man dem dry up, and di few man dem wha wi a see, a just some little $500 dem a spend.”

Plummy, a close friend of Goodaz, said that she used to make US$800 daily.

“But all a dat just gone from corona come a Jamaica,” she said. “Wi did kinda still a mek a little money even when the cruise ship dem stop, an wi stop get white man. But wi did still a sell to the driver dem an a mek a food. But from the prime minister come talk bout curfew, everything stop all together,” she said.

Plummy said that she sends $12,000 weekly to her 17-year-old daughter, who is attending nursing school.

“Right now mi a fret because mi don’t know mi head from mi foot, an is like no police nor no prime minister don’t care bout wi, because mi hear them a announce bout money and grant fi gi people, but all lakka wi so, wi nuh qualify fi it, because wi a prostitute, a dem no recognise wi.”

The women said that they may soon have to leave Falmouth, because they are unsure if they can wait out the lockdown