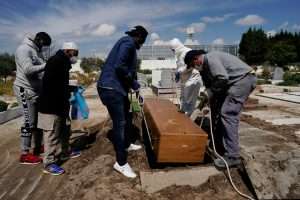 (NEW YORK POST) – More than 100,000 people across the globe have died of the coronavirus, according to new numbers released Friday.

The grim figures were released by Johns Hopkins University, which began tracking deaths caused by the disease since it first emerged in China in December.

In New York City, the death toll climbed to more than 5,000 on Friday, with 639 more Big Apple residents killed by the virus in a single day.

More than 16,700 people in the US have been killed by the virus — about half of them recorded in New York state.