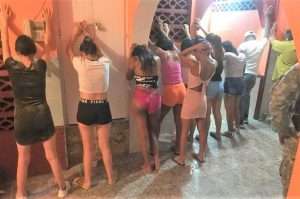 trinidadexpress.com – Commissioner of Police Gary Griffith says he has busted the first COVID-19 Quarantine Party early this morning with the arrest of 16 persons, eight of whom were Venezuelan nationals.

Based on information received by one of his informants, Griffith led a team of officers from the Special Operations Response Team (SORT) to Alicia’s Guest House, Cascade.

At around 12.30 am, the police team moved in and held the 16 persons around the pool area.

Of the eight Venezuelans, seven were women, with one being 17 years-old.

The detainees were taken to three police stations – Besson Street, Four Roads and West End for processing. The 16 were in breach of Regulations of the Public Heath Ordinance, implemented in March to fight the deadly COVID-19 virus.

In a press statement, Griffith said that on Thursday at the Ministry of Health’s media conference he warned promoters about having COVID-19 quarantine parties.

In less than 24 hours, Griffith said he got information about one of these parties.

Intelligence revealed that 50 businessmen were planning to attend a party at Alicia’s around 1 am. But a marked police vehicle drove pass earlier and may have rattled the promoters.

Griffith said as a result, he and his team had to move in earlier than planned. They arrived at Alicia’s in unmarked vehicles and were able to find the 16 persons around the pool, displaying no form of social distancing, involving Spanish speaking women conducting lewd dancing, and all breaching the regulations as it relates to more than five persons being assembled in the same area.

With the assistance of the CID and the Emergency Response Patrol (ERP), the 16 were transported to the three police stations as further investigations continue. Two of the persons were found to be in possession of keys for the premises.

Griffith said the owners of the property will also be brought in for questioning.

He said: “If you did not hear, then you would feel. No more warnings. I have informants throughout the country, and we would turn up when these people least expect it. We anticipated this, as there are similar fools in other countries doing same. There were reports of similar quarantine parties held in cities, such as New York where a number of people died from the virus as a result of attending such parties. Hundreds of similar parties have been shut down in UK on a nightly basis. We know of copycats so we expected promoters here would try to do the same thing. As I said at the media conference, this health crisis is a ticking time bomb and now is not the time to drop our guard or become complacent.”

Griffith said this type of action will not be tolerated and he thanked the public for informing him of this morning’s event.

The CoP is again asking the public to help us to help you. If you see something, say something via calls to 555, or messages inclusive of photographs or videos of anyone breaching the Health Regulations via the Police App, or whats app 482-GARY.